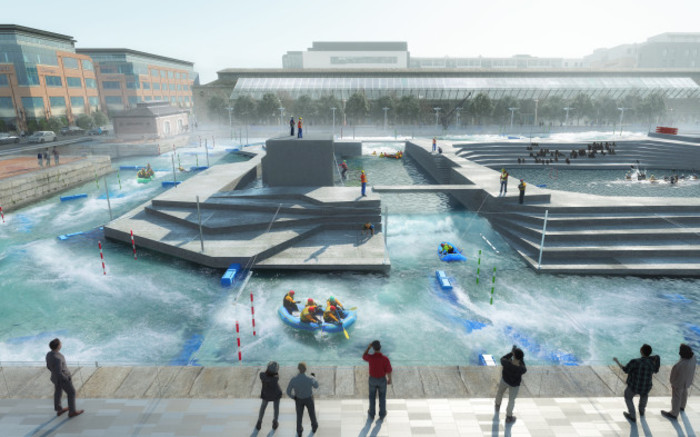 CONSTRUCTION WORK ON Dublin’s ‘world class’ white-water rafting attraction is expected to get under way next year.

New digital images and videos, being published for the first time this morning by TheJournal.ie, show what the amenity will look like once it’s up and running.

Two weeks ago, councillors gave the green light to the facility to be developed on George’s Dock in the IFSC on a site previously used to host events like Oktoberfest.

The white-water course is designed for use as a tourist attraction and by sports clubs but will also be made available to Dublin Fire Brigade and other emergency services as a training resource. It is expected to draw thousands of visitors on an annual basis.

The team behind Smart Cities, an arm of Dublin City Council which looks at developing Dublin using new and innovative technologies, has produced a 3-D vision of what the white-water rafting course will look like as part of its Smart Docklands project.

The video shows an inner reservoir of water surrounded by the white-water rafting course. Cafes already located along the CHQ building will overlook the attraction.


Jamie Cudden, head of the Smart Cities initiative said offering a visualisation of the project will “create a more informed discussion” on what the project will mean for local businesses and residents.

“This is a really exciting project for the Docklands and I think a lot of people are talking about animating the area, and this water animation strategy brings a lot of life to this.

“It’s something different as well, and shows the combination of all these things that will be great additions for the area and the local amenities.

“I think this idea of seeing what the potential is, and even more so doing that at an earlier stage lets people see if they like it and it creates a more informed discussion, so it’s a great tool,” he said.

The cost of developing the white-water rafting course is estimated to be around €22 million and will be provided through a combination of grants and council funding. It is expected to take up to 18 months to develop.

The dock, which runs adjacent to EPIC, The Irish Immigration Museum, has been lying unused in recent years. It was previously used to host Christmas markets and Spiegeltent concerts in addition to the annual Oktoberfest.

Councillors from the area have supported the development with councillor Christy Burke describing its current state as “the ugliest site” and expressing hope that the new facility will bring the area to life.

“It reminds you of a huge open grave that’s just left there. So I welcome this with open arms,” he told TheJournal.ie earlier this month. 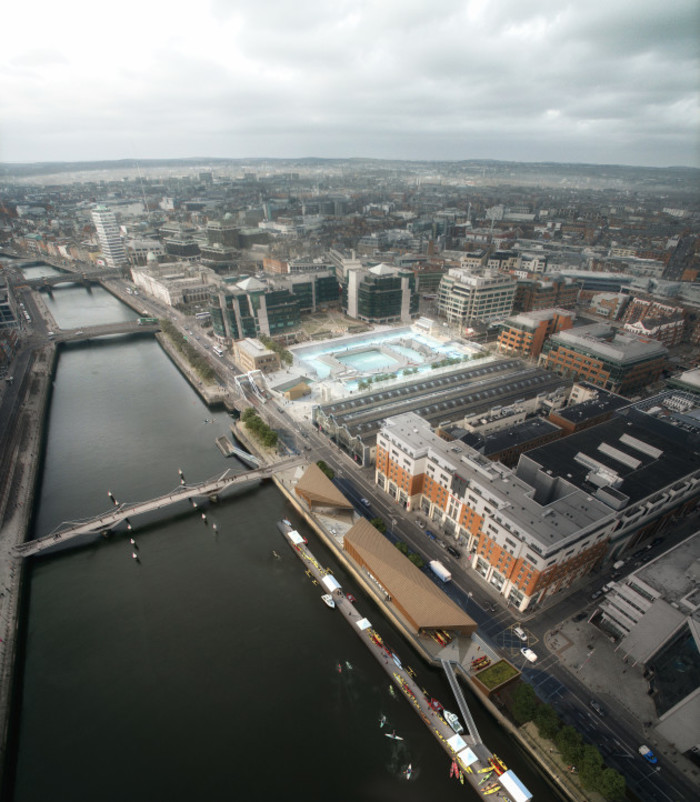 During the planning application process, a number of clubs, along with members of the public, made submissions in favour of the development.

13.11.2019Councillors give the green light to white-water rafting facility in Dublin city centre

David Henry, of the Silver Bridge Kayak Club said: “I am a recreational kayaker and in the past have had to travel to Britain to avail of similar facilities in preparation for expeditions further afield.”

“Such a scheme would be invaluable for local and national recreational water-sport users, youth clubs, scouting, kayak clubs, and most importantly, our athletes who regularly travel to Europe to train for international events.”

Another submission from Damien Byrne, chairperson of the National Canoe Polo Committee described it as an “excellent facility for beginners to learn basic kayaking skills in a safe, flat water environment”. 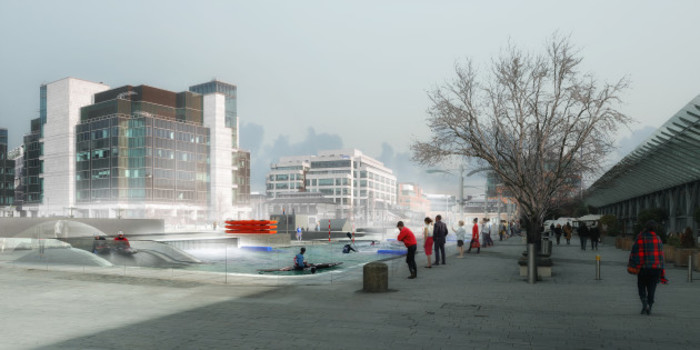 Dublin Fire Brigade also weighed in on the positive impact it would have for national water and flood rescue for fire services, civil defence, and other emergency services.

It said it will act as “an excellent water rescue training site, with multiple features and configurations facilitating the effective and safe execution of all water rescue syllabus requirements”.

Once the facility is open to the public, it will operate from early morning until around 10pm at night, with part of the daily timetables blocked out for fire and emergency services training.