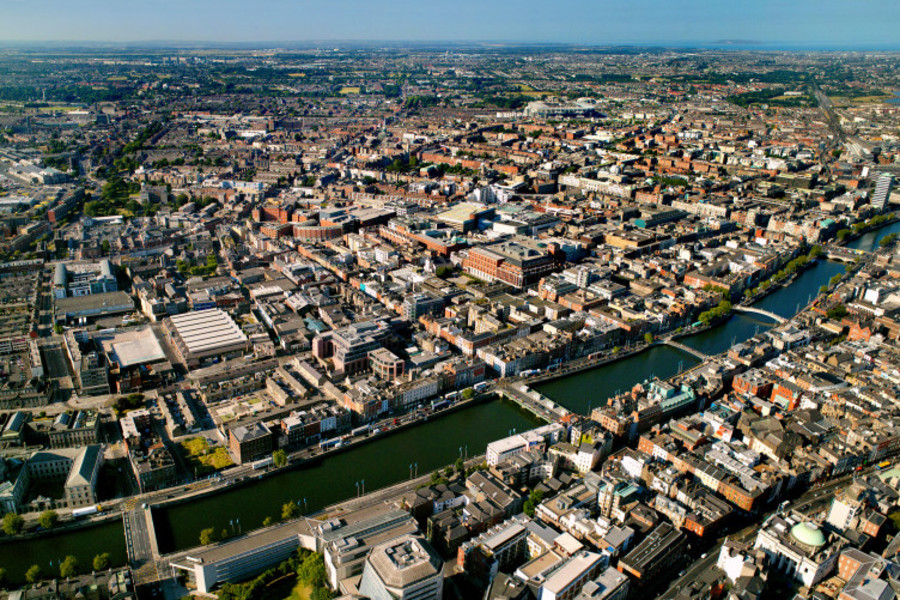 Source: Alamy Stock Photo
The Deputy Chief Executive of the council says the assumption that there are over 30,000 plus vacant units in Dublin City needs to be diffused.

DUBLIN CITY COUNCIL is to tell an Oireachtas committee today that there are “no low hanging fruit” when it comes to vacant residential units in Dublin that could be made available for use.

Richard Shakespeare, Deputy Chief Executive of the council, will tell the housing committee today the assumption that there are over 30,000-plus vacant units in Dublin City, as he said has been reported by the Central Statistics Office, needs to be defused.

He’s expected to state in his opening statement to the committee that council survey results dating from 2017 show Dublin’s vacancy is “nuanced and often conflated with availability and non-occupancy”.

For example, he states that a property can be “vacant” in the sense that no one appears to be living there, but upon investigation, the council has found that it actually is “occupied” and “in use”.

According to the 2016 Census, there were 183,000 vacant dwellings in the country on the night of the Census (not including holiday homes).

The Journal reported this summer that more recently, the GeoView directory Q4 2020 report (which lists addresses in the state using data from An Post) found 92,251 vacant addresses in Ireland, representing 4.6% of building stock.

Finance Minister Paschal Donohoe has indicated that the government plans to bring in the new vacant property tax as early as possible, and that Revenue returns from last month for the local property tax (LPT) will help design the new levy.

Shakespeare will tell the committee today that in 2017 the council undertook a pilot street survey to test a methodology for identifying vacant homes in four electoral divisions.

He will say further research was then conducted to consult both DCC and public sources of data to assess the suitability and eligibility of these 16 homes for the incentive schemes.

Of these 16, 13 were determined unsuitable for either of the incentive schemes – such as the government’s Repair and Lease Scheme or the Buy and Renew Scheme – leaving three homes remaining.

“In short this survey research shows that there is “no low hanging fruit” for residential dwellings in Dublin that are vacant and are available for use as social homes,” states Shakespeare.

The committee will be told that the CSO plans to deploy an “enhanced approach” during the next census in relation to residential properties that appear to be vacant, which will also add to the information Revenue obtains about vacant residential property from the LPT revaluation.

“Coupled together, this data should provide a more realistic picture of residential vacancy in the city,” he states.

The working definition of residential vacancy used by Dublin City Council is a home that is not occupied and has remained so for longer than 6 months and is not currently marketed for sale or rent by the owner.

02.09.2021Vacant property tax to be introduced next year in a bid to get empty homes back on the market
02.09.2021Affordable and social homes, tackling vacant sites: Key points from the major new housing plan

Shakespeare will say there are many reasons why a property may be vacant which
can include legal disputes or wards of court issues, houses that are currently for sale, situations where owners reside in long term health care facilities, as well as situations where the owners don’t have the resources to bring property up to building standards.

Dublin City Council is tasked by the Department of Housing, Local Government and Heritage to implement a Vacant Homes Action Plan, and as a result a vacant homes
officer has been appointed to initiate early actions to identify vacant homes and return them to use, he will say.

One scheme available to get vacant homes back in use is the Repair and Lease Scheme, which allows owners of private properties to avail of interest free state loans to refurbish a property to private rented standards and in return lease it as housing stock.

The deputy chief executive of the council will say that while initial public interest in the scheme was encouraging, once the details of the scheme were published interest declined. He will say 11 applications were received but only two were completed.

The Buy and Renew Scheme has also been used by the council to acquire long term vacant property from private owners at a current market valuation. The council has acquired 68 properties through compulsory purchase order and acquisitions, of which 41 have been refurbished and returned to housing stock.

An additional 27 properties are currently undergoing refurbishment works and are near to completion, according to Shakespeare, who will say there are plans to bring an additional 99 into housing stock over the coming years.