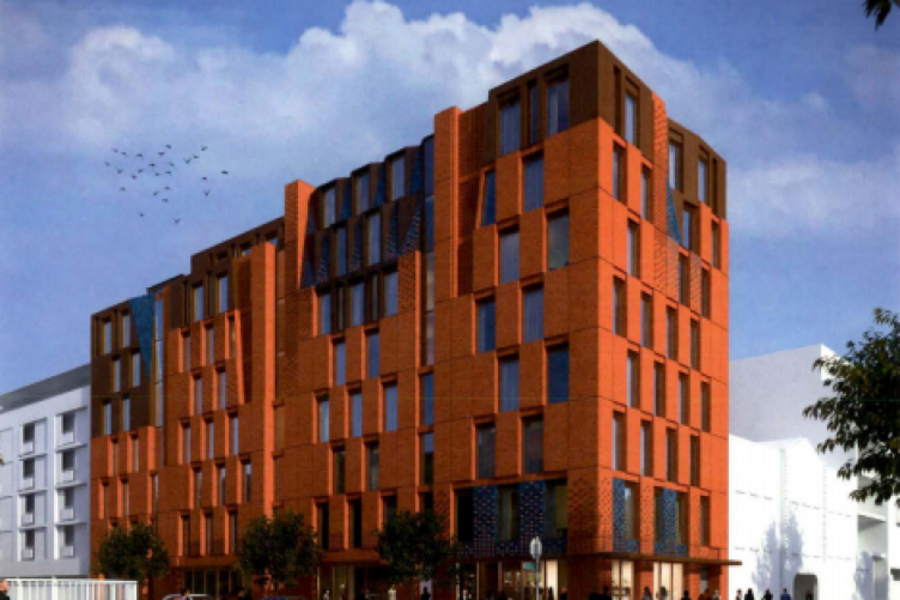 A rendering of what the hotel could look like as part of plans submitted to DCC
Source: Redline Studios
The developers paid €3.3 million to acquire the property last year.

PLANS FOR A large new hotel on the Liffey’s quays in Dublin are facing opposition from local councillors, businesses and residents as well as a leading heritage group over claims it will destroy views along the river.

Objectors have expressed concern about the excessive height of the proposed eight-storey building on the corner of Usher’s Quay and Usher’s Street with An Taisce claiming it would fundamentally alter views along the Liffey that have been preserved for 200 years.

Property investment partners, Warren Private and the Greenleaf Group, are seeking planning permission to demolish the existing three-storey building on the site which has been vacant since 2006.

The developers, who paid €3.3 million to acquire the property last year, want to construct a 106-bedroom hotel in its place.

Whitbread, the UK hospitality group which owns the Premier Inn hotel chain, has an agreement to lease the new hotel which will be reach almost 24 metres in height.

The development, which is expected to create up to 40 full-time and part-time jobs, has also received support from Fáilte Ireland which claimed it would help to address a shortage of tourist accommodation in Dublin.

However, An Taisce said buildings along the Liffey’s quays need to act as “a calm mass” to act as an effective backdrop to key monuments such as the Four Courts and the Custom House.

“The arrangement of subservience between the Liffey’s monuments and its ordinary buildings has been observed for the last 200 years at least and an eight-storey tower in the subject location would fundamentally change this relationship,” said An Taisce.

It also expressed concern about the proposed change of use of the site which already has planning permission for the construction of a seven-storey apartment block and said the plans for the hotel ran contrary to the council’s own Living City Initiative tax incentive scheme which is designed to encourage people to live in the historic inner city.

An Taisce claimed concern had been voiced from many quarters about the excessive construction of new hotels and other short-stay accommodation facilities in recent years and the “parallel absence” of new “sorely-needed” suitable and affordable homes in the city centre.

Residents of nearby Oliver Bond House said there were already a number of hotels in the area as well as homeless and addiction services which primarily served the needs of transitory populations rather than local people.

They also expressed concern about disruption from construction work, traffic and noise generated by the proposed hotel.

Sinn Féin councillor, Críona Ní Dhálaigh, said she supported local residents about their concerns but also called for the developers to be obliged to provide jobs to local people if the hotel was allowed to go ahead.

“There’s a total overconcentration of hotels and transient accommodation being built in this area. In fact, that’s all that seems to be getting built,” said Ní Dhálaigh.

She added: “We urgently need affordable family accommodation in the area.”

People Before Profit councillor, Tina McVeigh, said there were mixed views among local residents about the project as they recognised it would offer employment opportunities.

McVeigh questioned if a report provided by the developers justifying the need for a hotel was “outdated” given the impact of the Covid-19 pandemic.

The developers claim the hotel will “enhance the streetscape by creating a vibrant and lively frontage” onto the river as well as contributing over €2.5 million to the economy each year.