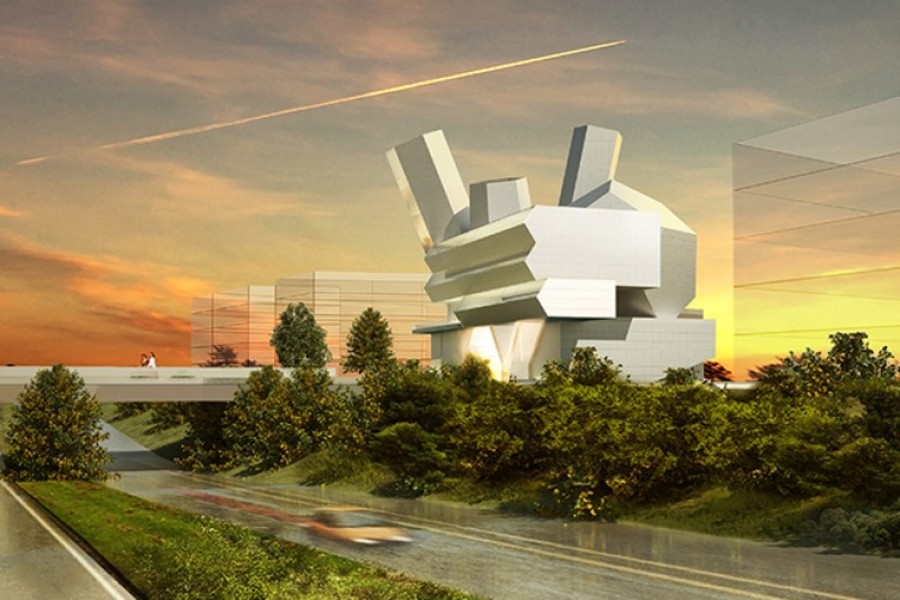 UNIVERSITY COLLEGE DUBLIN has received planning approval for works which will facilitate a major expansion of its Belfield campus, including a €48m “tilting towers” landmark building at its main entrance on the N11.

An Bord Pleanála has rejected an appeal by a local resident against the decision of Dún Laoghaire-Rathdown County Council to grant planning permission for enabling works for the first phase of UCD’s ‘Future Campus’ project.

The ruling clears the way for a €180m development which will provide 22,500m² of new teaching, learning and research facilities.

Planning permission had already been approved by the council for a new UCD centre for creativity to be located at the university’s main entrance as well as another large building – the centre for future learning.

The design of the development which features hexagonal towers up to 49 metres in height, tilted at an angle of 23.5 degrees, was inspired by the Giant’s Causeway in Co Antrim.

A decision on the latest ruling which only grants approval for landscaping, the demolition of several small buildings and the construction of a new arrival plaza at the university’s main gate as well as a reconfiguration of the internal road network in the campus was the final hurdle to secure a green light for the first phase of UCD’s expansion plans which will allow it to accommodate an extra 2,000 students by 2025.

An Bord Pleanála said the proposed enabling works were an appropriate form of development in the context of UCD’s Strategic Campus Development Plan 2016-2026 as well as being acceptable in terms of pedestrian and traffic safety and not having a significant impact on the local environment.

However, it imposed a limit on car parking spaces on the Belfield campus to 3,600 to ensure the college complied with its own Campus Travel Plan 2016-2026.

The local resident who opposed the project, described the proposed centre for creativity as “a form of modern folly” and complained its excessive height would have a detrimental impact on residential properties in the area.

Daniel Brennan said the upper sections of the two leaning hexagonal towers appeared “to have minimal practical use and to be primarily ornamental in purpose.”

“This totally unnecessary tilt adds to cost and to the environmental impact through greater use of steel and concrete,” Brennan remarked.

He claimed the architectural competition to design the building had a theme of James Joyce, who studied at UCD, and referred to the “giamond’s coarseway” in Finnegan’s Wake.

“This very minor, obscure and esoteric link to Joyce does not justify these extremely large, costly and environmentally unsustainable towers,” said Brennan.

He also complained that UCD had engaged in project splitting for the Future Campus project to avoid the need for it being subject to an Environmental Impact Assessment as well as the proposal to remove 177 trees on the campus.

UCD said the project would allow the university to realise a long-term ambition to create “a more welcoming and engaging entrance at the primary entry point to the campus while facilitating the growth and improvement of educational facilities”.

The university said it would enliven and improve what is currently “an underwhelming and substandard section of the campus” as well as creating a much-needed connection between the campus, the local community and the wider area.