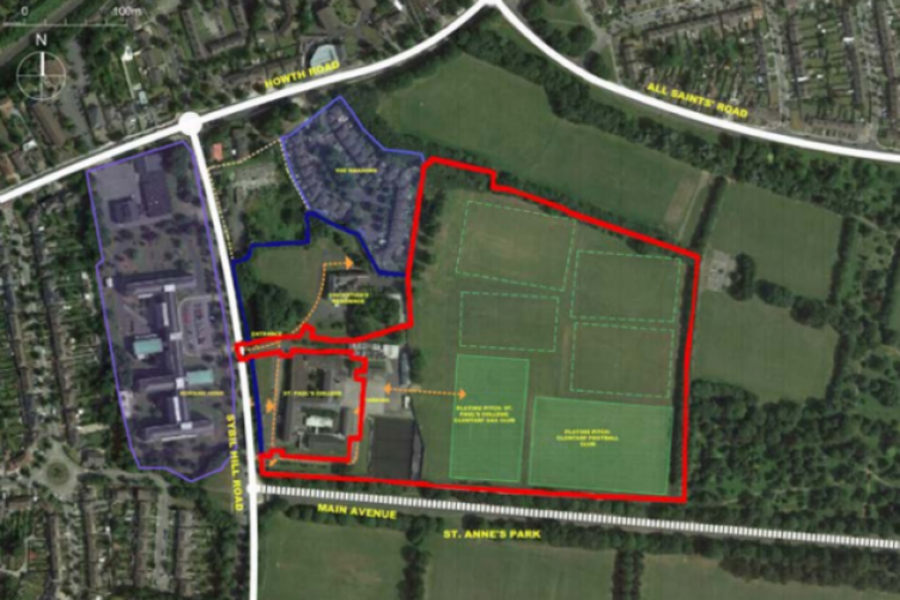 Proposed area for the site in Raheny.
This is the second time this year An Bord Pleanála has given a green light to the plans.

AN BORD PLEANÁLA has granted planning permission to contentious plans for more than 650 homes on playing pitches beside St Anne’s Park in Raheny in north Dublin.

It is the second time this year that the appeals board has given Pat Crean’s Marlet Group the green light for the 659 apartment scheme on lands east of St Paul’s College on Sybill Hill Rd, Raheny in spite of strong local opposition against the plan.

The apartments are to be located in nine blocks ranging in height from five to nine storeys and Marlet is to sell 67 units to Dublin City Council for social housing as part of its Part V social housing obligations.

The appeals board initially granted planning permission in February but this decision was quashed after being successfully challenged by opponents of the plan in the High Court.

The consent order was made in the High Court on the basis the board had not adequately addressed requirements of the habitats directive in relation to an appropriate assessment of the impact of the development on feeding grounds of the light-bellied Brent goose and other protected bird species in Dublin Bay.

The case was remitted back to An Bord Pleanala for a fresh adjudication and now the appeals board has given the project the green light once more in spite of a recommendation by Dublin City Council to refuse planning permission.

The appeals board also granted planning permission in spite of 654 objections lodged against the plan and the objections came from residents associations, sports clubs, environmental groups, local politicians and local residents.

Objectors had contended that the scale and density is excessive and that the proposed nine storey blocks are not compatible with the existing two storey dwellings of The Meadows.

The appeals board inspector in the case, Ciara Kellett recommended that planning permission be granted.

Kellett stated that the “proposal is in accordance with the National Planning Framework objectives to deliver compact growth in urban areas”.

Kellett commented that a number of those to lodge objections raised concerns and were of the opinion that the site was integral to St Anne’s Park and would set a precedent for development on green spaces.

She stated: “It needs to be clarified that these lands are not part of St. Anne’s Park.”

Kellett stated while the subject site and St Anne’s Park lie side by side, they are clearly two distinct areas.

During the course of the 153 page inspector’s report, Kellett stated: “St. Anne’s Park is in public ownership, the subject site is a privately owned landholding. This application is therefore not the privatisation of a publicly owned asset as has been stated in many of the submissions received as it has always been privately owned.”

Kellett concluded: “I am satisfied that the proposed development is acceptable in principle, is proposed on suitably zoned lands, will contribute towards the housing need identified in the Development Plan, will not negatively impact on the visual or residential amenities of surrounding dwellings, will not impact on the amenities of park users and will not set a precedent for development in green spaces in the city.”