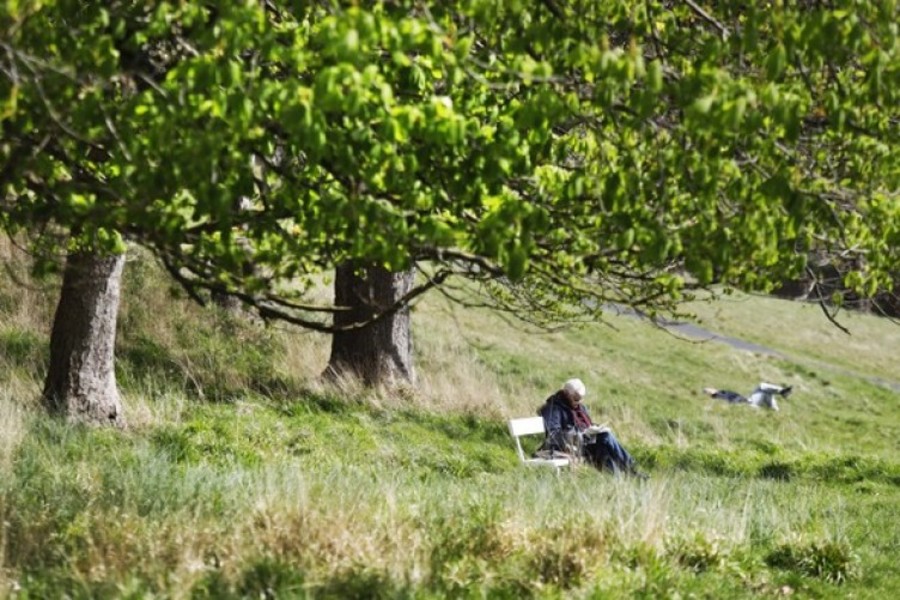 A man reads his newspaper while sitting under a tree in the Phoenix Park Dublin
Source: Leon Farrell / RollingNews.ie
Professor Philip Nolan has said that Ireland is looking at a summer where we “make the most of the outdoors”.

CONSTRUCTION AND RETAIL are likely to be the first industries allowed to reopen once the spread of Covid-19 slows, while hospitality will face a longer wait.

Public health experts anticipate an “outdoor summer” for Ireland, with some potential loosening of restrictions on social contacts if the number of cases allows for it.

Speaking on RTÉ Radio One’s This Week, Professor Phillip Nolan, chair of the Irish Epidemiological Modelling Advisory Group, said that construction and retail are likely to be industries “first on list” to return when case numbers ease.

“Some sectors like retail and construction are safer than others, so they would be logically first on the list when we’re at safer levels of viral prevelance and can consider such things,” Nolan said.

Pubs and restaurants are unlikely to be allowed to re-open until the middle of summer, Taoiseach Micheál Martin has said.

The government does not foresee the return of hospitality until the number of cases is significantly lower.

The Irish Hotels Federation has said that hospitality workers are disappointed by the prospect of several more months before any reopening of pubs and restaurants.

A mid-summer reopening would significantly impact the tourism industry and affect around 160,000 hospitality workers who have temporarily lost their jobs.

Speaking today, Minister for Finance Paschal Donohue said that the governmnet recognises its “heightened obligation” to businesses while they are asked to stay close.

“What I have always said as Minister for Finance is that as long as we are in a position where we are requiring businesses to be shut for public health reasons, there is a need for us to provide additional support to those employers and to those who have lost their job,” Donohue said.

He said supports for businesses would be outlined after a decision is made on how long public health guidelines will be in place.

Restrictions that will be in place during March are to be set out “with clarity“ this week, Minister Roderic O’Gorman said earlier today.

Measures for March are expected to be laid out after the Cabinet meeting on Tuesday and be reviewed on a monthly basis.

Aside from the reopening of schools, no major easing of restrictions is expected until May.

Looking ahead to the summer, Professor Nolan said: “I think we’re looking at an outdoor summer, if I can be blunt about it.”

“We’re looking at a summer where we socialize outdoors as much as we can and we make the most of the outdoors,” Nolan said.

He said people will need to continue to limit their social contacts during the summer, but possibly to a lower extent than under current restrictions.

The summer would be one “where we holiday and recreate at home”.

“The vaccination program brings enormous hope. The darkest hour is the hour before dawn, in some senses.

“There’s a period of great vulnerability where we have to take great care not to spread the virus again as we work through the process of vaccinating the population. But as we vaccinate the population, things will get easier.”

More than 320,000 vaccines against Covid-19 have been administered in Ireland, including 120,000 second doses.