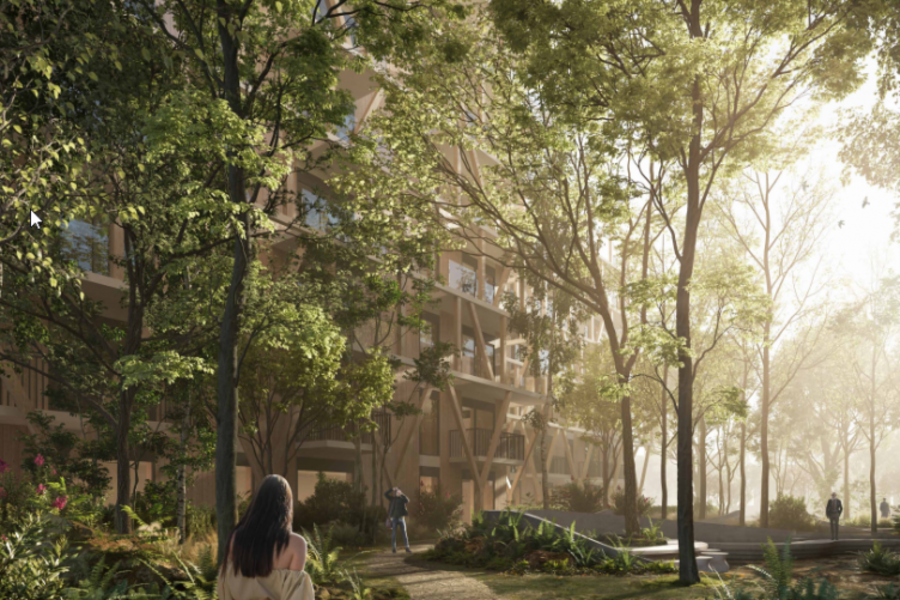 Artists impression of the proposed public open space design between building A & B.
The Council concluded that it will have a detrimental impact on the character of the area due to its scale, height and visual prominence.

A DUBLIN LOCAL authority has recommended to An Bord Pleanala that a planned €135 million ‘build to rent’ apartment scheme for former Blackrock College lands be refused on a number of grounds.

As part of a 69-page planning report, Dun Laoghaire Rathdown County Council has recommended that planning permission be refused on four separate grounds for the 244 unit apartment scheme by Lioncor at lands at Cross Avenue on a site adjacent to the private fee-paying school.

The Strategic Housing Development (SHD) scheme by Lioncor subsidiary, 1 Players Land Ltd is made up of three blocks with one reaching nine storeys in height.

However, the Council has recommended refusal to the appeals board after concluding that it will have a detrimental impact on the character of the area due to its scale, height and visual prominence.

The local authority has also stated that the scheme would set an undesirable precedent for other similar developments and would be contrary to the policies of the Building Heights Strategy of the Dun Laoghaire Rathdown County Development Plan.

The Council also recommended refusal due to insufficient parking spaces proposed (0.29 spaces per unit) and ruled that this will result in on-street car-parking pressures which will be exacerbated given the location of the site in the context of existing schools.

The local authority has also concluded that the proposal may endanger public safety as a result of the lack of off-street car-parking spaces to serve the proposed development.

The council has also recommended planning refusal as the layout of the scheme’s basement car-park will inhibit the use of the cycle spaces in the proposal.

However, throughout the operation of the Strategic Housing Development process, An Bord Pleanala has often granted planning permission to schemes where local authorities recommended refusal.

One of the third parties to express concerns over the Lioncor plan is Rector at St Philips and St James’ Church, Rev Canon Gillian Wharton.

Rev Canon Wharton has told the Council that the Church has been at Cross Avenue since 1824. She states that the church is recorded as a protected structure “and architecturally significant”.

The St Margaret’s Residents Association has registered its opposition to the scheme while the Board of Management of Booterstown National School has also raised concerns.

The school submission states that it is concerned with the scale and density of the proposed development which it believes is inappropriate for the location.

This fast track scheme follows Lioncor purchasing the site at Cross Avenue for around €16 million last year from the order responsible for Blackrock College, the Holy Ghost or Spiritan congregation.

In the application documentation lodged with An Bord Pleanala by the applicants states that the scheme “is an exemplar build to rent development”.

Planning consultants for the scheme, McGill Planning state that the proposed building height “ensures optimal use of this site at this urban location”.