Why don't people live in rural town centres? Six towns were given €100k to see why - here's what they said 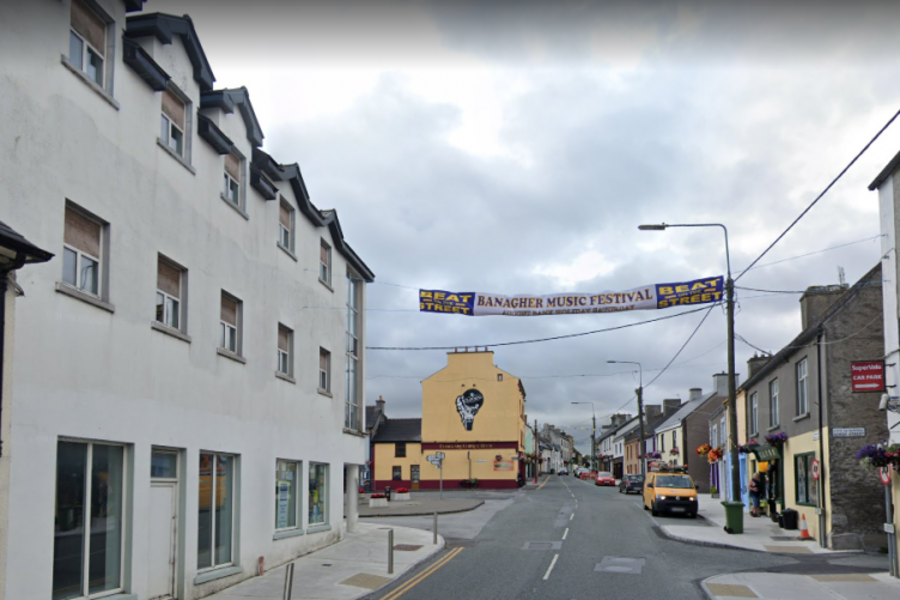 The town of Banagher in Offaly was one of those chosen for the project
Source: Google Street View
A pilot initiative from the government gave six rural towns €100,000 to develop proposals aimed at rejuvenating town centres.

TO JUST ADDRESS the issue of vacant buildings in a town won’t entice people to live back in town centres.

It needs a town to come up with a “master plan” and buy-in from potential investors and existing property owners, according to a new government report published this week.

The pilot Town Centre Living Initiative picked out towns in Ireland and, for the last two years, has looked at their progress in making the town centre more attractive for people to live in.

In October 2018, the government said that six towns in rural Ireland had been picked to receive €100,000 as an invitation to “develop innovative proposals to encourage more people to live in rural town centres”.

The report published earlier this week, however, was finished in February 2020 before the arrival of Covid-19 in Ireland.

While it purports to offer suggestions that could be adopted on a wider scale, it doesn’t account for the effect that the pandemic may have had and how its suggestions may be altered in a post-lockdown environment.

Using the money, each town was asked to look at a variety of factors that prevent people living in town centres including the buildings, amenities, public realm, infrastructure and services.

The report noted that towns were asked to focus on one specific part of their town centre and, while it was acknowledged that €100,000 wouldn’t renovate a building, it was said that once a particular project was identified funding could be made available through the government’s €1 billion rural regeneration development fund.

The example of Banagher

The team in Banagher built upon existing work by the Banagher Development Group and Offaly County Council.

They sought to contact owners of buildings in the centre, particularly those that were vacant, to understand why they were unused.

Problems they identified included the perception there was little to discourage holding on to empty properties; some buildings had been vacant for so long they’ve become uninhabitable and would be costly to repair; and a concern from property developers they wouldn’t get a return on their investment.

Furthermore, the repair and leasing scheme isn’t popular and, despite the level of vacancy in the town, there are limited options available for tourists, including a shortage of hotel accommodation.

The reasons for vacancy (l to r) in Ballinrobe, Banagher, Boyle, Callan, Cappoquin and Castleblayney.

To help combat these issues, a number of measures were taken.

“The council team worked to develop a detailed design for one building typology as an example of ‘living over the shop’, illustrating how a typical town centre building could be converted to modern family accommodation,” the report said.

Furthermore, the council has negotiated the purchase of a unit with an aim to develop a three-storey town centre building on main street into a community facility, digital hub, office accommodation, meeting rooms and an exhibition space.

The report said: “There is a sense that this innovative reuse could energise the town, attract remote workers to live in the town centre, and provide a strong amenity anchor function for the whole town population.”

Another proposal seeks to develop a community-run self-catering accommodation project that would also include improvements to the currently derelict hotel in the town centre and public realm works.

As part of its wider potential solutions, the report said: “The team identified the need for incentives to encourage adaptive reuse and reduce the pressure on demand for rural one off housing.

Incentives put forward include a Vacant Building Tax; a requirement to ‘use or lose’ inherited buildings; low cost loans; or tax write offs of rental income for a period of 10 years. One suggested mechanism for the delivery of these incentives could be the designation of a specific area to avail of a grant or taxation scheme, to complement the existing social housing initiatives.

The importance of making multi-annual funding available was also highlighted as a means to give clarity and confidence to those willing to take on the adaptive reuse of protected structures.

In each case, the report noted that the towns managed to confirm the extend and impact of long-term residential vacancy in town centres. They each used different means to establish this, however, and many of the projects “suggested a single standardised mapping tool” to help “measure, understand and address vacancy in towns”.

Strategic long-term planning is needed in each area, as well as public participation and buy-in to get anywhere with the process.

It said: “One clear point that emerges from the six towns is that no single solution can address vacancy. While towns have much in common, they are unique places with unique identities.”

The report then makes 15 recommendations under five headings of providing supports, finances and resources, imagination and vision, confidence and motivation, and approach.

One of these is the establishment of Ireland’s Town Partnership – a national, independent not-for-profit that could be funded by the government and support Irish towns and their development. Similar partnerships exist in Scotland and France.

In three of the towns, for example, it was found that all the costs associated with buying and refurbishing a building was between 25-40% higher than its resulting market value.

Other proposals to help address such issues include the incentivisation for the reuse of vacant buildings through tax strategies and simplifying the system for applying for grants.

Reacting to the report, Green Party TD for Carlow-Kilkenny Malcolm Noonan urged local authorities around the country to read it and see what they could take from it.

“Our town centres were in decline pre-Covid but now they are in deep crisis and it is important to radically rethink what these important cultural and civic spaces are for,” he said.

Speaking during the week, then-Minister for Rural and Community Development Michael Ring said this initiative has helped to “significantly improve our understanding of the reasons why more people don’t live in town centres and the steps that could be taken to counteract this”.

He added that he’d asked department officials to bring forward a set of proposals to the next government before the end of the year to implement the recommendations in the report.