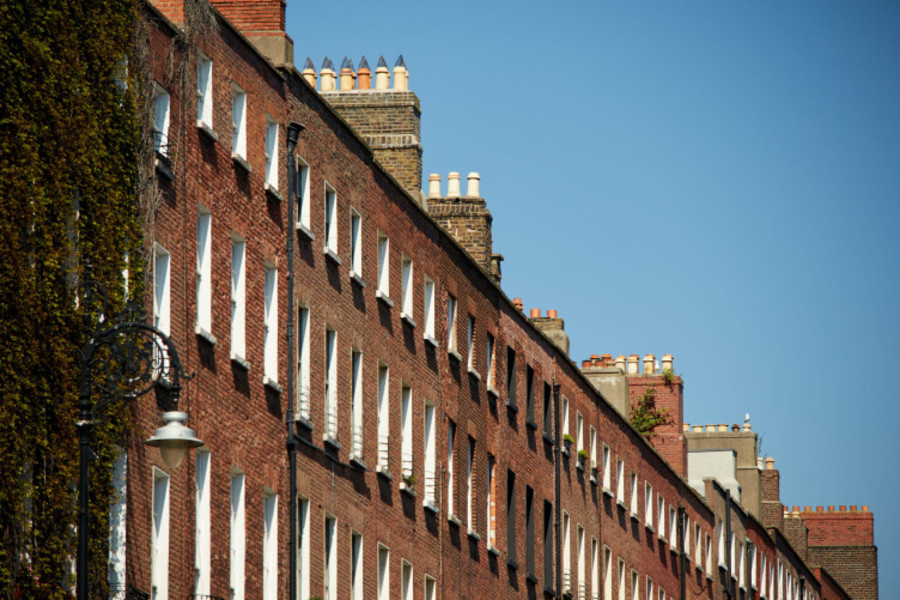 Source: Alamy Stock Photo
According to the RTB, this is the highest yearly increase since late 2017.

RENTS ACROSS IRELAND have increased by 8.3% on an annual basis in the third quarter of 2021, with the Residential Tenancies Board saying there is “uncertainty” throughout the sector due to Covid-19.

The newest rent index from the RTB shows an 8.3% annual increase in rent prices, the highest national growth rate in rents since the fourth quarter of 2017.

The rental market watchdog have said that due to the easing and introduction of Covid-19 restrictions throughout the year, trends in the rental sector have been impacted with a “large degree of uncertainty across the sector”.

In the report, the RTB says that the current national standardised rent stands at €1,397, a €44 increase compared to the previous quarter.

Dublin remains the county with the highest standardised rent, at an average of €1916 per month.

Leitrim was the county with the lowest standardised rent, at an average of €731 per month.

There are also now 12 counties with standardised rents over €1,000, with both Carlow and Waterford hitting over €1,000 per month for the first time. 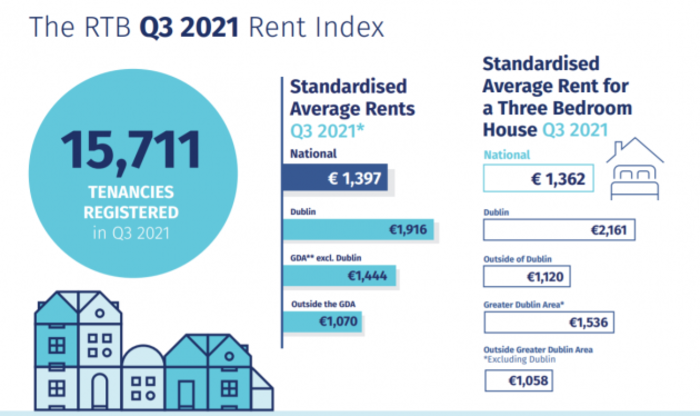 The RTB also noted how there was a decrease in the number of tenancies registered during the third quarter compared to both 2020 and 2019.

The watchdog said in the report that between July and September there is usually an increase in tenancies registered due to the beginning of the academic year, but that this pattern was not replicated this year.

There was a total of 15,042 tenancies registered in those three months, but it was down compared to Q3 2020, where there were 23,026 registrations.

Padraig McGoldrick, Interim Director of the RTB, said that the new report shows that rent prices have continued to rebound following their slowdown earlier in the pandemic.

“This Q3 2021 report continues to show a significant upward trajectory of rent levels in the Irish rental market and reflects a sharp rebound from a reduction and slowdown in rent levels during the pandemic,” said McGoldrick.

“It is clear, the ongoing introduction and easing of Covid-19 related restrictions around rental price growth in line with the public health measures has been affecting trends presented throughout 2020 and 2021 and there continues to be a large degree of uncertainty across the sector.”

McGoldrick said that the increase in rent prices this quarter was indicative of the growth of the Irish economy following the lifting of restrictions, alongside the drop in tenancy registrations.

“The significant rise in rent prices across Ireland is indicative of the wider growth being experienced in our economy, as a result of lifted public health restrictions. Rates of unemployment have dropped significantly, and Irish retail sales continue to grow.

A lower number of tenancy registrations has impacted average rents, seemingly reflected by a tendency for people to stay in their rental properties longer. Rents too continue to increase more rapidly outside the Greater Dublin Area (GDA) and other non-urban areas, potentially linked to the continuation of the pandemic-effect around long-term working and lifestyle choices.

Housing Minister Darragh O’Brien said that he noted the RTB report, saying that his department will continue to work with the RTB to ensure Rent Pressure Zone (RPZ) legislation is followed.

O’Brien said that since the RTB was granted the powers to investigate landlords who break RPZ rules, there have been “hundreds of letters” sent to landlords not following the legislation.

“In September, I formally asked the RTB to instigate a campaign to identify and pursue non-compliance with rent-setting responsibilities. This is now under way and I have been informed that hundreds of letters a day are currently issuing to landlords,” said O’Brien.

He also acknowledged the “significant” fall in the number of tenancies registered during the third quarter.