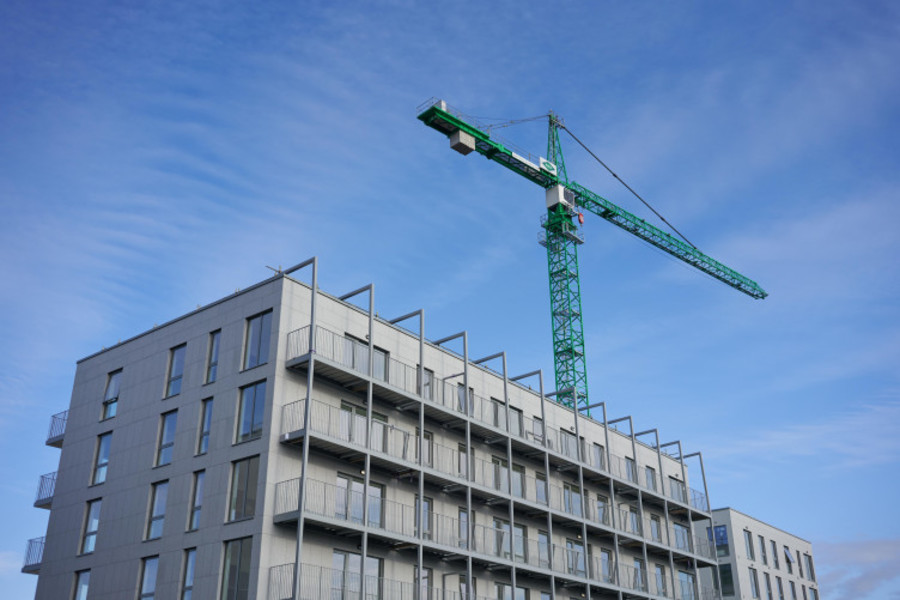 TAOISEACH MICHEÁL MARTIN has said overhauling the planning system through new laws is “essential if we are to meet our climate change agenda”.

Speaking to reporters in Brussels this morning, he said “if we are to fulfill our obligations in the draft Climate Action Plan, and also in the housing areas” the new planning laws are needed.

But a potential coalition clash is brewing, with a number of Green Party members uneasy with the proposed changes.

When questioned about the potential new year clash between coalition parties, the Taoiseach said the the planning bill was approved by all three parties in Government yesterday, but it will go to pre-legislative scrutiny where it will be evaluated and examined.

Among the major changes proposed in the ‘Planning and Development Bill’ is a ban on residents groups from taking High Court actions against planning permissions.

An outline of the proposed bill states that judicial reviews “will have to be taken by an individual or individuals, rather than by the (residents) association”.

However, the bill includes a provision for costs protection for judicial review cases, “unless the Court considers that the proceedings are frivolous or vexatious or an abuse of process”.

The proposed bill also states that a Judicial Review can be taken by an “environmental NGO who meets certain criteria”.

“The bottom line is we also have urgent needs in respect of meeting climate change challenges particularly in the offshore wind area,” he said.

Martin added that “if the climate change plan is to be realised within the timelines it is setting this planning Act has to be put in place”.

He said “lengthy analysis and debate” will take place next year, but ultimately said that the planning law changes are also needed to speed up the delivery of housing so the Government can “build houses faster and a higher level” than is what is being delivered at the moment.

His comments come as a number of opposition TDs raise concerns about another piece of legislation, the Planning and Development and Foreshore (Amendment) Bill, which they state is being rushed through the Dáil this afternoon.

One of the main concerns highlighted by TDs is the legislation concern over the independence of An Bord Pleanála with the appointment of the chair and other board appointments moving to ministerial appointments.

Social Democrats TD Cian O’Callaghan said the proposed changes will undermine the independence of An Bord Pleanála and centralise important power in the minister’s hands.

He said following years of controversy over Ireland’s planning decisions, the power of the minister to make appointments was taken away in the 1980s “for very good reasons”.

The Irish Council for Civil Liberties (ICCL) has also criticised the speed of passage of the legislation, saying the Bill will have huge negative impacts on independence of the planning system and An Bord Pleanala, and requires proper scrutiny and debate.

Sinn Féin’s Eoin O’Broin said there should be a hybrid system, combining the old panel appointment system with an open competition model.

He said the minister has not set out the process system of how the appointments procedure will work.

The minister is asking the Dáíl “on trust” to give the green light to a process that “he won’t even say what it is”.

Never has the Dáil been “asked so much with such little detail of what is being asked today”, he said.

Speaking in the Dáil today, O’Brien said the proposals to change the appointments system is “an interim step, not a rushed step”.

He said there is an “immediate need” to put in place an interim chairperson for An Bord Pleanála to help unlock the planning delays which are impacting housing delivery.

“Overhauling and reforming An Bord Pleanála to rebuild and restore public trust after a turbulent period and to ensure it can play an efficient and effective role at the apex of our planning system cannot be delayed,” he told the Dáil.

While the main legislative provisions relating to An Bord Pleanála are being examined in the new consolidated planning Bill, which is mentioned above and was approved by Cabinet yesterday, the Planning and Development and Foreshore (Amendment) Bill deals with “certain initial matters requiring immediate action”.

The action plan for An Bord Pleanála, which was carried out by the Office of the Planning Regulator, requires certain issues to be addressed, such as board vacancies and the board’s case load in light of its new marine functions, said the minister.

Appointing a chairperson of An Bord Pleanála, for an interim period, while a permanent chairperson is recruited through open competition must be progressed, added the minister.

Expanding the provision to appoint temporary ordinary board members to allow for the appointment of serving or former civil servants, public servants or employees of the board for a term of up to one year, is also needed, said O’Brien.

Providing for a “suitable, independent, objective and transparent procedure” by which recommendations may be made to the minister on the recruitment and appointment of ordinary members of the board through an open competitive process, will be legislated for.

This will replace “the archaic list system and nomination system that has existed since the board’s establishment”, said the minister.

The Bill enables the establishment of a new appointments process for board members of An Bord Pleanála through open competition, he said, where any member of the public may apply if they believe they have the relevant experience or qualifications to serve on the board.

The current panel process is “outdated”, said O’Brien, calling the reform of the process to appoint board members to An Bord Pleanála a critical step to ensure impartiality and transparency in it as an independent planning body which is foundational to the success of the planning system in Ireland.