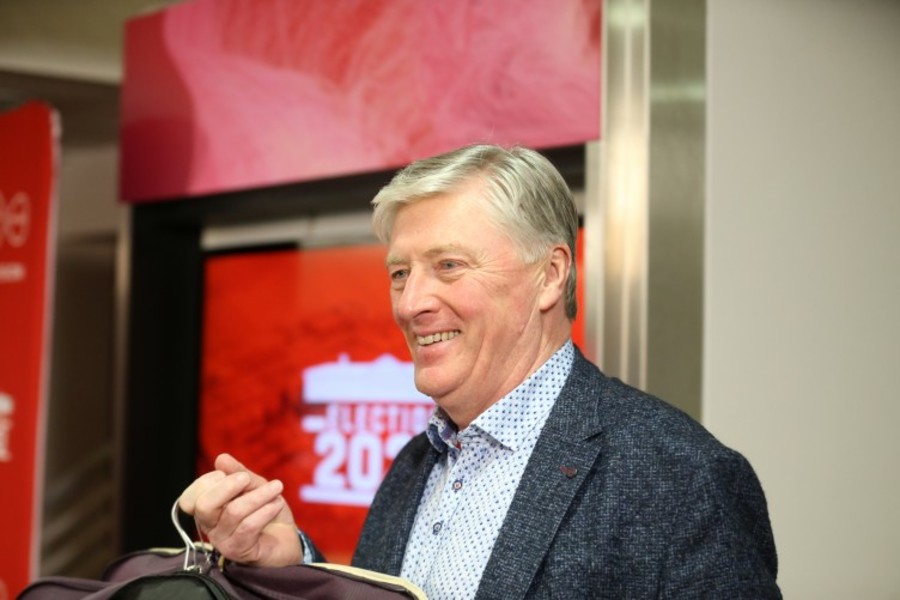 Source: Sam Boal/RN
Bartra now has four weeks in which to lodge an appeal to An Bord Pleanala.

BROADCASTER PAT KENNY has emerged victorious in his opposition against plans for a five-storey 104 bedroom nursing home on a site beside his home in Dalkey.

Kenny along with his wife Kathy had lodged a 15-page objection running to over 5,000 words against the plan.

The Kenny submission was one of 37 lodged by locals with the Council concerning the planned scheme with Dalkey Community Council adding its weight behind the strong local opposition against the Bartra plan.

However, the battle by the Kennys and their neighbours in trying to prevent the nursing home from going ahead may not be over.

It is now open to Bartra to lodge an appeal against the Council decision to An Bord Pleanala.

The Kennys and their neighbours previously fought Bartra over a planned apartment complex on the same strip of land.

Dun Laoghaire Rathdown County Council turned down that plan but Bartra secured planning permission for 18 apartments and six houses on the 1.4 acre site on appeal to An Bord Pleanala.

Bartra is free to initiate the process to commence construction on the apartment scheme at any time.

In their objection concerning the proposed nursing home, the Kennys told the Council: “As in the pantomime, we suggest that the developers are attempting to stuff an ‘Ugly Sister’s foot’ into Cinderella’s delicate slipper.”

In their own objection, the Kennys argued that the proposal would change the entire character of the neighbourhood, and hugely diminish the enjoyment that each householder currently has in their own property.

The Kennys argued that the proposal “would also set a precedent that could ultimately seriously damage the character of the area”.

In terms of the scale and massing of the proposal, the Kennys stated that “this proposal inserts a monolithic concrete structure effectively in the middle of back gardens of current residents adjoining the site”.

The Kennys stated that it is their view that Bartra has “bought a challenging and problematic site, which requires sensitive and creative treatment”.

The Kennys state that the area is made up of 11 detached houses along the lane, including Maple Tree House.

They claimed: “The development proposed would utterly change the character of the neighbourhood, by inserting what is effectively a large commercially driven five-storey project into a two-storey domestic housing environment.”

On behalf of Dalkey Community Council, Dr Susan McDonnell requested that planning permission be refused “in view of our widespread concerns”.

Dr McDonnell told the Council: “We have concerns about the scale, height and massing of this proposed 104 bed nursing home located in a residential area where the surrounding buildings are mainly two storey.”

The proposed nursing home rises from two to five storeys and planning documents lodged on behalf of Bartra with the application contended that the nursing home scheme will have a significantly reduced impact on the Kenny home and neighbouring properties than the permitted apartment scheme.

In the documents lodged on behalf of Bartra by Thornton O’Connor Town Planning, Patricia Thornton stated that unlike the permitted scheme, there is no development in the southern portion of the site and this significantly reduces the impact of the property on the surrounding dwellings at the southern end of the site.

Thornton further stated that the nursing home scheme has been sensitively designed to minimise the potential impact on the residential amenity of surrounding properties.

Thornton stated that the incorporation of design features such as a setback top floor, carefully positioned fenestration, obviated windows, no development at the southern end of the site and high quality landscaping will ensure that the proposed development knits into the receiving environment.

Thornton further stated that the scheme’s location close to Dalkey village and to the local Dart station will ensure that future residents have the opportunity to remain living within their community.

The planning consultant added that the future residents will be provided with appropriate medical care and support while also enjoying the benefit of existing social and community infrastructure in the village.

As part of her 55-page planning report lodged with the application, Thornton contended that what is proposed represents a significant investment in an under-utilised infill site providing “a much needed nursing home facility for the area”.

Thornton stated that the principal objective of the application is to contribute towards reducing the shortage of residential care home beds.

Thornton argued that as a result of its contemporary, sensitive design, the scheme is an appropriately scaled form in its receiving environment” and importantly will respect the surrounding context, including nearly dwellings.

Bartra now has four weeks in which to lodge an appeal to An Bord Pleanala.