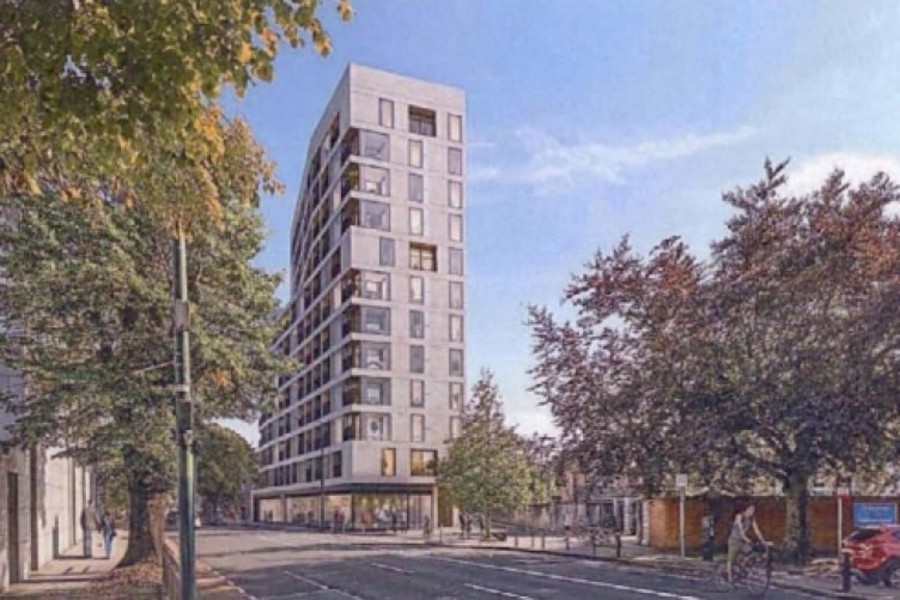 Source: John Spain Associates
Over 30 individual objections have been lodged against an application for planning permission.

RESIDENTS IN DONNYBROOK have voiced strong opposition to plans for another high-rise apartment development in the centre of the southside village across the road from Donnybrook stadium claiming its density is higher than buildings in central New York.

Over 30 individual objections have been lodged against an application for planning permission for a 12-storey, build-to-rent apartment complex on the site of an existing Circle K petrol filling station on Donnybrook Road.

The development on a 0.11 hectare site will comprise 84 residential units with a café and retail unit at ground floor level as well as a residents’ lounge, communal terraces on several floors, games room, co-working space, library, cinema room and concierge services.

The proposed building which will reach almost 40 metres in height is being developed by Red Rock, a company founded by developer Keith Craddock.

Fianna Fáil councillor Deirdre Conroy said the development would provide a block of “non-affordable, non-purchasable homes” which was more suited to a dockland site than an historic village.

At a density of 763 units per hectare, Conroy said it was “one of the highest numbers of units anywhere in the world” and compared it to the average of 232 units per hectare in parts of 5th Avenue in New York.

Local resident and Labour councillor Dermot Lacey said the height of the proposed building was significantly higher than the council’s own guidelines of 16 metres and would be “an appalling imposition on the old village of Donnybrook.”

Together with other developments in the area including plans for around 100 co-living units on the site of the former Kiely’s pub in Donnybrook and another 12-storey apartment block a short distance away on Eglinton Road,  Lacey said around 400 extra transient homes would be created in the village.

“That is not good for sustainable community development,” Lacey said.

The development has also been opposed by several members of Donnybrook Tennis Club who claim the proposed building will overlook their grounds and radically alter the amenity of the club.

One of the club’s trustees said the application represented “one of the highest density residential proposals ever to be lodged for an inner suburban site in Dublin” and “exceeds the average densities of Manhattan.”

One local resident said the recent approval of a number of high-rise developments meant “Donnybrook village will essentially cease to exist as a community” with “a little more of Dublin’s history and soul” being sold to the highest bidder.

However, consultants for Red Rock said the site on a “statement corner” was currently underutilised, while the proposed build-to-rent development would create “a significant opportunity to provide residential accommodation, promote urban consolidation and increase the building heights in an appropriate location well served by high frequency, quality public transport.”

They said the development would support the aims and objectives of the Government’s National Planning Framework while the height of the building at almost 40 metres was “appropriate.”

The same site has been the subject of a series of unsuccessful attempts to build apartment developments over the past 20 years.

An Bord Pleanála refused planning permission for a four-storey apartment block containing 28 units  on the site in 2002 on the basis its size and height were “out of character” with the area.

A separate plan to develop an 11-storey mixed use development on the same site was refused by Dublin City Council in 2008, while two years later An Bord Pleanála turned down a proposal for a mixed-used development up to seven storey in height on similar grounds.