Hayley Halpin 24/09/2020
The final design of the new network was published by the NTA today. 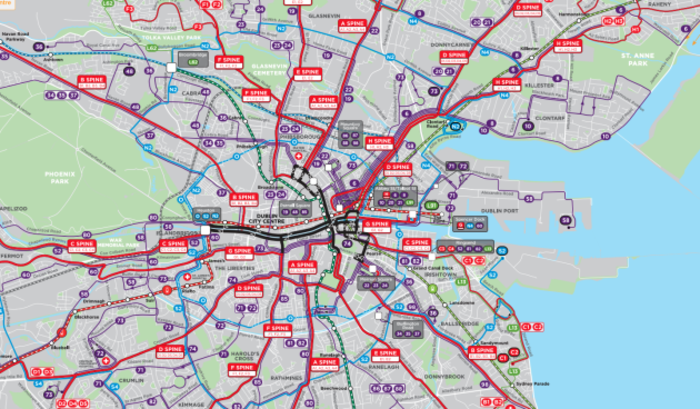 THE NEW BUS network for Dublin will increase bus services by 23%, the National Transport Authority (NTA) has said.

The final design of the new network was published by the NTA today following three rounds of public consultation and a total of 72,000 submissions.

The implementation of the network will take place on a phased basis over a number of years starting in 2021, subject to government funding.

The plan will see the current routes throughout Dublin Bus abolished and replaced with spines and orbital routes.

The most frequent services will be along the “spines” which cross through the city centre.

Along with that, there will be orbital routes that stay outside the city centre that cross over the various spines.

The new network will see increased evening and weekend services, with most frequent routes operating every 15 minutes or better on weekends and Saturdays, most on Sundays also.

There will be a number of routes that will operate 24 hours a day.

Overall, the level of bus services in the Dublin network will increase by 23% as a result of the new network, according to the NTA.

“Bus services across Dublin needed to be redesigned to be more coherent and efficient to meet the demands for a growing city and I am delighted we are now able to implement this new plan after extensive public consultation,” Minister for Transport Eamon Ryan said.

“The last six months have been very challenging for everyone in Dublin and across Ireland. Bus services have provided an essential frontline service for the public and city during this time and the new Dublin Area Bus Network will allow the service to grow to meet people’s needs as the city recovers,” Ryan said.

The bus network plan published today is for bus services only and a separate third round of public consultation for the Core Bus Corridor (bus lanes and cycle tracks) will take place later this year.

All information regarding the new Dublin Area Bus Network can be viewed and downloaded here.