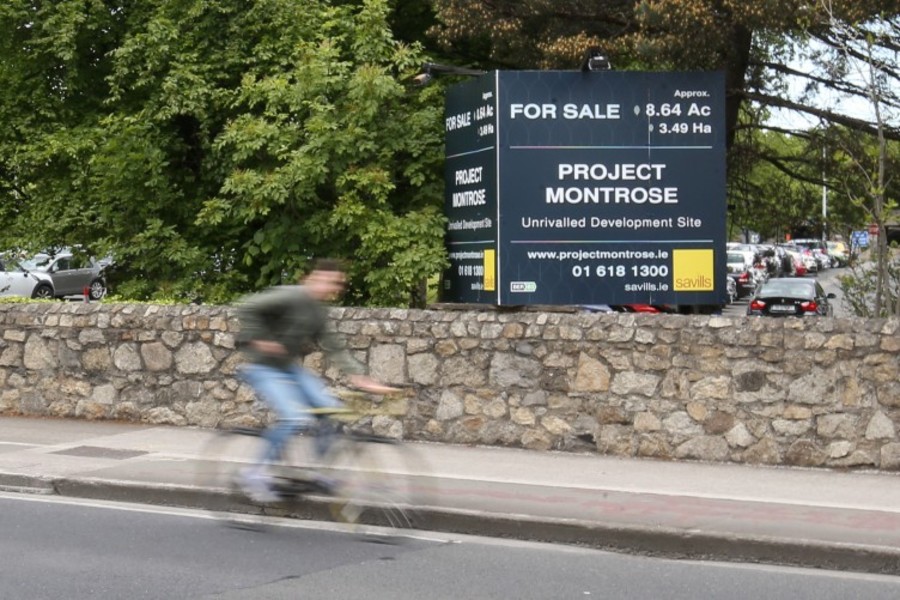 Signs advertising the site for sale at RTÉ prior to its purchase by Cairn Homes.
Source: Sam Boal/Rollingnews.ie
The plans received 19 objections from local residents who argued they were “seriously flawed” and must be rejected.

AN BORD PLEANÁLA has given the green light to Cairn Homes for their contentious €338 million apartment complex plan for former RTE lands at Montrose in Dublin 4.

The house builder has secured planning permission for the 611 apartment plan in nine apartment blocks ranging from four to 10 storeys in height along with three townhouses in spite of strenuous local opposition.

In total, 19 objections were lodged against the plan including ones from the Ailesbury Rd Residents Association, the Austrian embassy and Ailesbury Rd resident, Pat Desmond, wife of billionaire, Dermot Desmond.

Mr Desmond has also been a vocal opponent of the plan describing the scheme as ‘Ballymun Towers South Dublin’ in a letter to Dublin city councillors.

However, the appeals board has ruled that the proposal would constitute an acceptable quantum and density of development in this accessible urban location; would not seriously injure the residential or visual amenities of the area and would be acceptable in terms of urban design, height and quantum of development.

The appeals board has attached 29 conditions to the decision.

Cairn Homes plc welcomed the decision with a spokesman on Wednesday saying:

Cairn’s focus is on the design and delivery of exceptional apartment schemes in great locations. It is currently completing Donnybrook Gardens, a new premium apartment development very close to Montrose which will launch later this month. Cairn looks forward to adding Montrose to its expanding delivery portfolio.”

The spokesman pointed out that the Board considered the development “to be of strategic and national importance having regard to the definition of strategic housing development… and its potential to contribute to the achievement of the Government’s policy to increase delivery of housing from its current undersupply set out in Rebuilding Ireland”.

Senior Planning Inspector with the appeals board, Sarah Moran recommended that planning permission be granted.

In her 162 page report, Moran stated: “While the increased height contrasts with the surrounding residential and institutional developments, it represents a reasonable response to its context and is stepped down at site boundaries to reduce impacts on adjacent properties and protected structures.”

She also stated: “I am satisfied that the development will not result in significant adverse impacts on residential amenities such as would warrant a refusal of permission.”

Moran stated that the scheme “will deliver a high quality residential development at a serviced site”.

The planning permission now paves the way for Cairn Homes to enter talks with Dublin City Council over its proposal to sell 61 of the apartments in the plan to the city council for €30.17 million to comply with Part V social housing obligations.

The documentation lodged with the application puts a value of €521,377 on the two bed apartments and €472,797 on the one bed apartments.

The appeals board gave the plan the go ahead after a 67-page planner’s report from Dublin City Council recommended that planning permission be granted for the ‘Project Montrose’ plan.

The planners recommended that planning permission be granted in spite of a number of members of Dublin City Council expressing ‘serious reservations’ over the plan.

The city council planners stated that they agree with the developers that the location allows for additional building height along the Stillorgan Rd, given the precedent for taller buildings along the road.

In their objection, Ms Desmond along with former Irish Sugar managing director Chris Comerford, and businessman John Gleeson stated that the scheme for the site at RTE’s campus is “seriously flawed” and must be rejected.

The three residents initiated in March a separate High Court challenge against the legality of the legislation underpinning the Government fast track SHD system.

Planning documentation lodged by Cairn Homes with the application states that Project Montrose represents “a once in a lifetime opportunity for a landmark development in one of Dublin’s most desirable neighbourhoods”.

It went on to say that the scheme “offers a unique vision for sustainable development in a parkland setting” and will provide for a series of taller “Villa’ style buildings fronting the Stillorgan Rd with a perimeter of lower ‘Pavillon’ buildings along the rear boundary.

Planning consultants, Avison Young stated that the design rationale for the proposal “is to provide a landmark residential development delivering a new urban neighbourhood with increased height and density and high quality urban frontage on a gateway to Dublin city”.