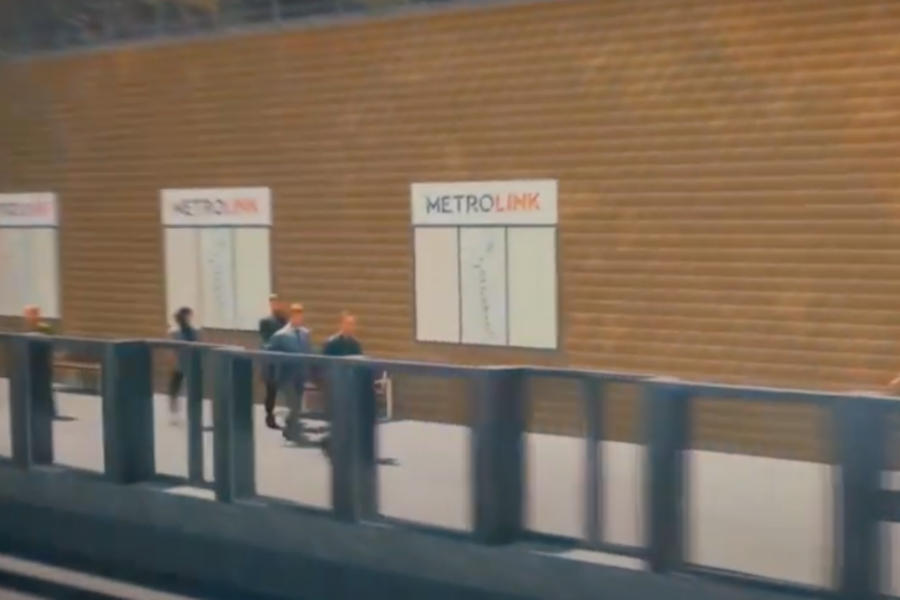 Artist's interpretation of a future MetroLink station.
Source: NTA
The Taoiseach says it is ‘wrong’ to say the project has not been delayed.

TAOISEACH MICHEÁL MARTIN has said that 2034 is a “realistic assessment” of when Dublin’s MetroLink will be delivered.

His comments come after the Minister for Transport Eamon Ryan indicated over the weekend that MetroLink will not be delivered by 2027, as envisaged.

The €3 billion metro line is set to run from Swords in north Dublin and terminate at Charlemont near Ranelagh.

While Ryan said he was still “very confident” the project would go ahead, he said the delivery timeline is dependent on the planning process.

“I think the existing [National Development Plan], if I recall rightly, said it would take five years. It would be completed by 2027. That was never likely to be achievable, I’ll be honest.

“The budget forecast for it is likely to be much smaller than the final outcome. There’s been a big cost inflation since then, particularly in big infrastructure projects. So those indicative numbers weren’t ones that we expected to be able to meet,” Ryan said on Sunday.

Labour’s Duncan Smith, who said the Taoiseach is the “chief” and “boss”, asked Micheál Martin in the Dáil today to state that he is still committed to MetroLink.

In reply, the Taoiseach said 2034 is a “realistic assessment of where things are at”, adding: “One has to be honest and realistic.”

The Taoiseach said the interpretation of what Minister Ryan said at the weekend – that the project is being delayed – is “completely wrong”.

He added that the minister “was misinterpreted” and he was merely pointing out the myriad of issues facing the project and the knock on impacts they could have on the project.

“There is a commitment to doing it,” he added.

Last week, Government sources told The Journal that no decision had been made to “push back” plans, but they said delays are expected due to a number of processes required for the project such as securing the railway order and compulsory purchase orders, as well as a tender process.

In a statement to The Journal last week, a spokesperson for the Department of Transport said that government approval and finalisation of documents to lodge the railway application with An Bord Pleanála, which are expected to happen in the next several months, will “determine the progress of MetroLink in the coming years”.

“The construction start date for MetroLink will ultimately be determined by successful receipt of planning permission (Railway Order) from An Bord Pleanála and then securing formal Government approval to proceed to construction under Decision Gate 3 of the Public Spending Code,” the spokesperson said.

“While the exact start date will depend on the granting of planning permission and government decision under the public spending code, there has been no decision to defer the construction start date to 2027.

“It is the Minister’s intention that construction commence within the lifetime of this government, noting the requirement for planning permission and the necessary government approvals.”

Within government parties, a number of TDs are unhappy with the news that the line will not be ready until 2034, with Fine Gael’s Senator Regina Doherty questioning why it has taken so long for clarity on the date. Fianna Fáil TD Paul McAuliffe said there is now a need to get to the bottom of why delays have occurred.