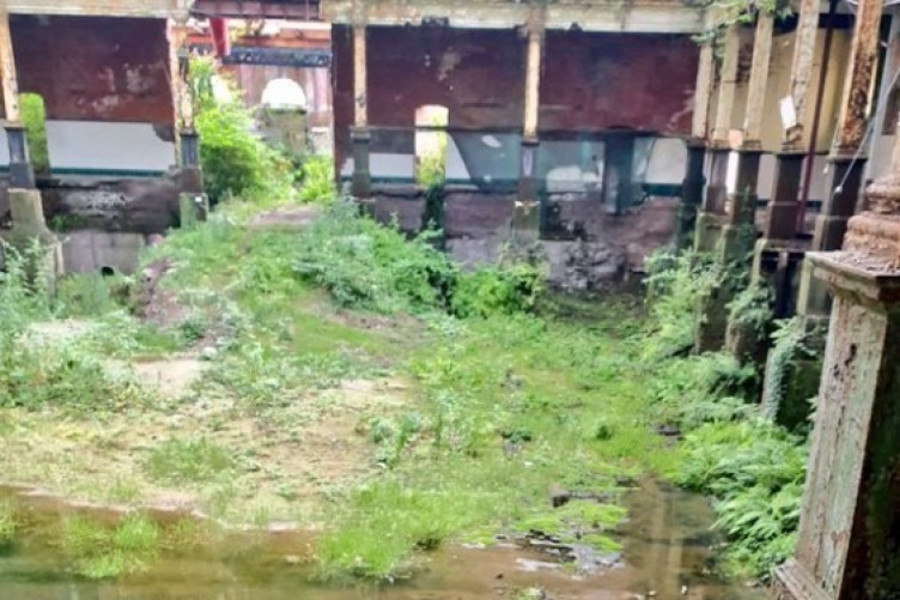 Source: Old Dublin Town
The Guinness family, now in a legal dispute with businessman Martin Keane, wants to restore the market to its former glory.

THE RESTORATION OF Dublin’s Iveagh Market to a working market is expected to cost around €23 million and is not likely to be completed for at least four years.

The market, built in 1902 by Lord Iveagh, Edward Cecil Guinness, has been derelict for more than 20 years and is the subject of an ongoing legal dispute.

Late last year the Guinness family took back possession of the historical market in the latest twist in an ongoing ownership saga. The current Lord Iveagh, Edward Guinness, wants to restore the market to its former glory with space for food and clothes stalls, coffee shops, art displays and pop-up shops.

Paul Smithwick, who represents Lord Iveagh, told TheJournal.ie that the cost of restoring the structure to a working market is likely to be around €23 million.

However he said the building is secured now and some external work has already taken place.

“Over the last couple of months lots of interim works have been done, removing debris and getting everything painted up outside to generate interest and show that something is happening,” he said. “We’ve also covered in a number of major holes in the open area.”

The horse and cart yard of the Iveagh Market has already got a new lease of life this year, with a number of food stalls operating in the space.

“No alcohol can be served at the moment but we’ll be applying for a licence in the district court within the next 10 days,” Smithwick said. “We were terribly careful to make sure we didn’t go too fast too soon and end up with enormous crowds because of the pandemic.”

He said materials are also now being removed from inside the building to improve fire safety.

Just last weekend there was a minor fire at the Iveagh Market, which Smithwick said occurred after water got into the switchboard.

Following a viewing earlier this month organised by the Liberties Cultural Association, there were calls for swift action to be taken to ensure the space is preserved and restored.

Speaking to The Journal after the viewing Graham Hickey, conservation director at the Dublin Civic Trust, said the structure is now “heavily decayed”.

“A major problem with the building is the amount of water ingress over the years, all of the outside brick has become saturated,” he said.

That type of Edwardian brick, Portmarnock brick it’s called, has a glazed face, a ceramic-type face and so many of those have exploded off the brick. There’s only so much repair mortar you can use on bricks of that kind, probably a lot of the brick will have to be replaced, which is a great shame.

10.08.2021Call for swift action to preserve Iveagh Market as new images show 'shocking' deterioration
10.12.2020'This is a bit of hope for locals': Guinness family intervention at Iveagh Markets could end long-running saga over its future

“It’s very sad to see that level of deterioration, I saw one or two of the photos and it’s really quite shocking.”

The key delay to the commencement of extensive restoration work inside the building is the ownership dispute.

Businessman Martin Keane was granted planning permission for a redevelopment in 2007 after agreeing a 500-year leasehold with DCC in 1997. The council later announced its intention to repossess the building as two separate planning permissions had lapsed and Keane failed to raise finance for development.

A third planning application by Keane was refused by the council on the basis that he was not the legal owner, and he launched a High Court case.

The Guinness family got involved in December last year, invoking a clause in the original Deed of Conveyance from 1906 which stated that the market would revert to the Guinness family if it was not developed as a market.

Keane has challenged the Guinness family’s claim to the property and the case is now before the High Court, with the next hearing due in early October.

Paul Smithwick said the Guinness family will be seeking a quick resolution to proceedings as he said the building is in need of immediate work to ensure original features can be saved.

“The damage to the roof and everything is so advanced that with any delays in litigation the roof could come down, that’s the judgement of the architects. With another winter, piece by piece it could start to come down.”

He said the cost of fixing the roof alone is estimated at €6 million.

“It can be rescued in part, but nothing will be rescued if the whole thing falls down,” he said.