Housing supply: What changes are we likely to see in the next 18 months?

Cónal Thomas 03/09/2021
The ‘Housing For All’ plan, which outlines targets for new supply, allocates €4 billion annual investment in housing. 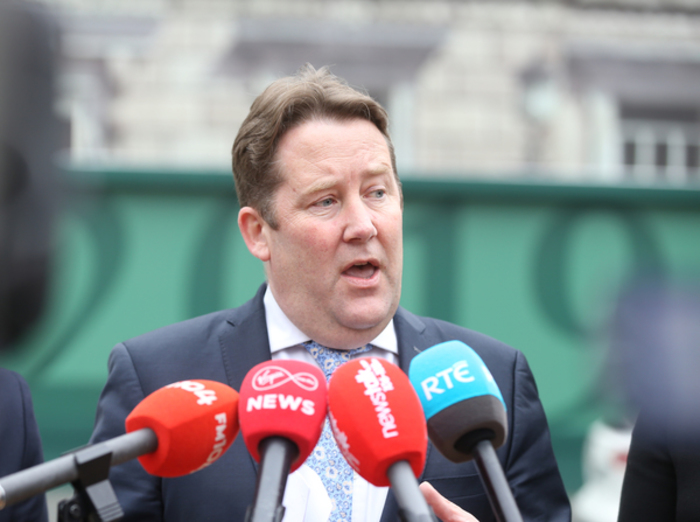 THE GOVERNMENT’S HOUSING for All plan launched yesterday aims to create 300,000 new homes by the end of the decade, with more than half to come from the private sector.

The ‘Housing For All’ plan, which outlines targets for new supply, allocates €4 billion annual investment in housing.

Some of the space for those homes will come by transferring State land to the Land Development Agency, particularly for 15,000 homes aimed at helping to “revitalise urban centres”.

But while the plan sets out the Government’s targets for the next 10 years, what changes are we likely to see in the next 18 months – and how many new homes will be built in that time?

The plan states that by 2030 a total of 40,500 new homes per year will be built in Ireland made up of social, cost-rental and affordable, and private owned and private-rented homes.

However, looking at next year the levels are significantly lower than that – a total of 24,600 new homes.

The ESRI said in June the Government could help to solve the housing crisis if it borrowed an additional €4 billion to €7 billion per year.

Under ‘Housing for All’ the Government has committed to spending €4 billion per year up to 2030 to deliver the number of homes required.

The ESRI also told the Department of Housing in December that Ireland may need to build as many as 33,000 new homes a year to meet demand.

The Economic & Social Research Institute said that Ireland faces another ten years of rising prices and rents without a ‘significant’ amount of spending in building homes.

Defending the level of reliance on the private sector in the plan, O’Brien said: “We need to use all the weapons in our armory to tackle this.”

Speaking on Morning Ireland today, O’Brien said the Government is working with local authorities and housing bodies to ensure they are equipped to deliver the units.

When asked who specifically is building the houses, the minister replied “builders”.

“For those who say that it’s just purely the public sector who can get us out of the housing crisis that’s just not correct, we need public and private together to deliver over 33,000 homes a year which we’re going to get to.”

O’Brien added that the State is “the biggest builder in this country and, through the Land Development Agency, is going to build now on State-owned land”.

Despite the setbacks posed by Covid-19, however, house-building activity recovered strongly from the impact of the pandemic after sites were reopened in May, according to the Banking and Payments Federation of Ireland (BPFI).

Residential property prices increased by 6.4% nationally in the year to June 2021.

02.09.2021Affordable and social homes, tackling vacant sites: Key points from the major new housing plan
02.09.2021Only 'matters of substance' to be referred to courts under Government planning overhaul

According to the BPFI report, 5,021 housing units were completed in the second quarter of 2021, a sharp improvement on last year.

Work on a total of 12,700 housing units commenced in the three months to the end of June, the most in a single quarter since 2007.

Construction activity is also noticeably moving away from the capital and into its environs, the BPFI said.

Commenting on the findings, BPFI chief executive Brian Hayes said: “Notwithstanding the negative effects of the pandemic, we see that activity levels are increasing significantly.

“The recovery of the residential construction sector continued with the removal of pandemic-related restrictions on activity in the sector from May 2021.

That figure chimes with next year’s target of 24,600 new homes, however under the Government’s plan the target of 33,000 new homes were year will not be achieved until 2024.

He said it is “nowhere close to the 20,000 public homes that are needed each year to make a serious dent in the social and affordable housing crisis.

The Government has said it is aiming to ramp up supply through a number of policies.

In the short-term, it plans to expand the Local Authority Home Loan scheme by the end of the year so that single people who have a gross income of up to €65,000 in the Greater Dublin Area, Cork and Galway will be eligible for the loan, with a reduced interest rate.

Currently the maximum amount a single person can earn to be eligible for the scheme is €50,000.

For first-time buyers, a new Affordable Purchase Scheme should see local authorities making homes available at an average purchase price of around €250,000.

Additionally, a new First Home shared-equity scheme between the State and banks that participate is aimed at making up the difference between the cost of a home and the maximum available mortgage from a bank.

The First Home scheme will be available nationally, as opposed to the Affordable Purchase Scheme, which is on a local basis.

Changes to planning permission processes are also set out with a view to increasing housing supply.

There are 70,000 to 80,000 non-activated planning permissions across the country, including 40,000 in the Dublin area, some of which is because of viability issues where the cost makes it “uneconomical” to build.

To address that, a Croí Cónaithe (Cities) Fund will be established to “encourage greater activation of existing permissions”.

The fund should help to stimulate the activation of existing planning permissions for apartment developments with four floors or more that are above certain density thresholds. The apartments would be for sale to owner occupiers.

Under the Planning and Development Act 2000, developers currently need to use 10% of zoned residential land for social and affordable homes.

That requirement is increasing from 10% to 20% and will now also include provision for affordable and cost-rental housing.

With reporting by Ian Curran and Órla Ryan