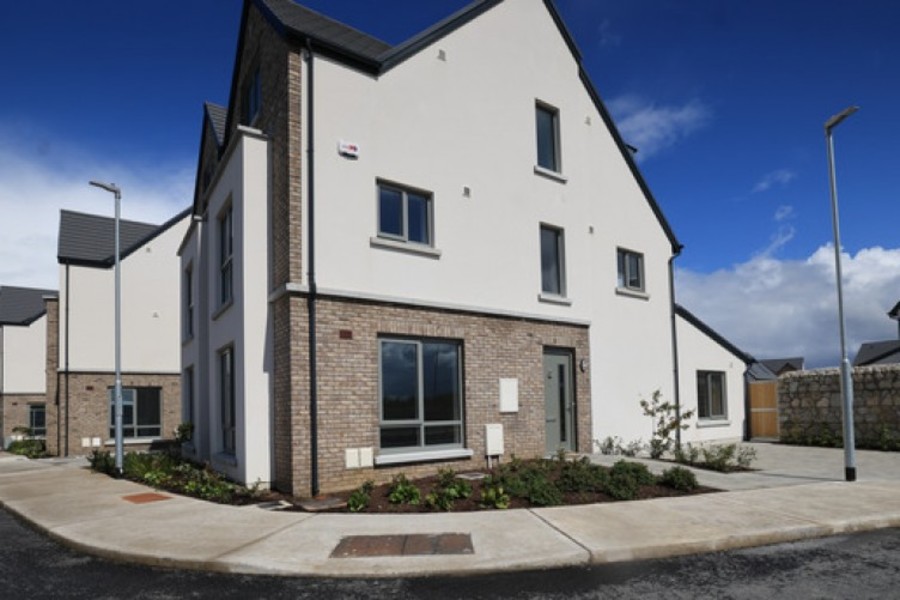 Mullen Park estate in Maynooth, Co. Kildare.
Source: Eamonn Farrell/RollingNews.ie
The Housing Minister has said that proposals could be tabled as early as next week.

PROPOSALS AROUND CHANGING the tax treatment of institutional investors who purchase large sections of housing estates could be considered by government ministers as early as next week it seems.

Yesterday, The Journal reported that Housing Minister Darragh O’Brien has instructed his officials in the Department of Housing to look at the options available with a view to bringing changes as part of new Planning and Development legislation.

This could see the legislating for a specific ring-fencing of homes for first-time buyers as per the minister’s own 2019 Bill or possibly banning investment funds snapping up estates in their entirety outside of city centres.

It is understood that investment funds buying up housing estates will be “corrected”.

The Housing Minister as well as Finance Minister Paschal Donohoe are discussing the issues, and solutions should be ready “as soon as possible”.

Speaking in the Dáil this afternoon, Tánaiste Leo Varadkar that the government will take action on the issue “in the coming weeks”.

While the proposals might go to Cabinet next week, overnight changes are not being ruled out.

O’Brien told this website that it will be an “all of government approach” which means his Fine Gael colleagues will have to get on board, and with taxation falling into the lap of the finance minister, it will be interesting to see what tax loopholes being availed of by these investment funds might be on the chopping board.

“We do need to look at tax treatments in this space,” he said, something he repeated today on Ireland AM.

In what could be seen as putting pressure on Finance Minister Paschal Donohoe, O’Brien said there is only so much he can do with planning laws.

On Newstalk’s Pat Kenny radio programme the housing minister said the tax treatment of these funds is where things will be solved long term.

He confirmed that measures are being considered to stop investment funds buying up full housing estates “up to and including” an outright ban.

O’Brien commits to having proposals ready by next week when it comes to legislating for investment funds.

The housing crisis and the fallout from Round Hill Capital buying 135 homes at a new development in Maynooth, Co Kildare dominated today’s Leaders’ Questions.

Sinn Féin’s Pearse Doherty said that international funds buying up property in Ireland has been “happening for years” and that is has been “encouraged and incentivised” by government policy.

“You’ve created this situation for these international investment funds snapping up family homes, locking first-time buyers out off the market,” he said.

That is the reality, you’ve frustrated the hopes and dreams and aspirations of many workers and families who aspire to own their own homes.

He added: “Tánaiste will you, as Sinn Féin has argued for over the years, take away the tax breaks and advantages that you gave to these funds?”

In response, Tánaiste Leo Varadkar said that both he and government “strongly believe in the concept of homeownership” and the buyout in Maynooth “is not consistent with government policy”.

“As things stand at the moment less than 1% of the housing stock in Ireland is owned by investment funds, and that’s much lower than will be the case in most other developed countries,” Varadkar said.

“Their correct role is to finance the construction of developments, not to swoop in and buy housing estates or developments that are already substantially complete. That’s what we need to change and that’s what the government intends to change with the actions it’s going to take in the coming weeks.”

Social Democrats co-leader Róisín Shortall said that the government has  “professed surprise” about global funds buying up homes when it’s been happening for some time.

“Since 2018 they have spent €4 billionn on residential property in this country. Did anyone in government even notice that Tánaiste,” she asked.

He latter added that the government does not want to introduce something that may have the unintended consequence of reducing the supply of housing.

“We want to avoid a reduction in supply by banning forms of private investments but I’m sure we can find a solution that gets the balance right. I can’t give you a timeline at the moment, but I know that Minister O’Brien and Minister Donohoe are treating this with urgency and we’d hope to have proposals very soon,” he said.

- With reporting by Rónán Duffy