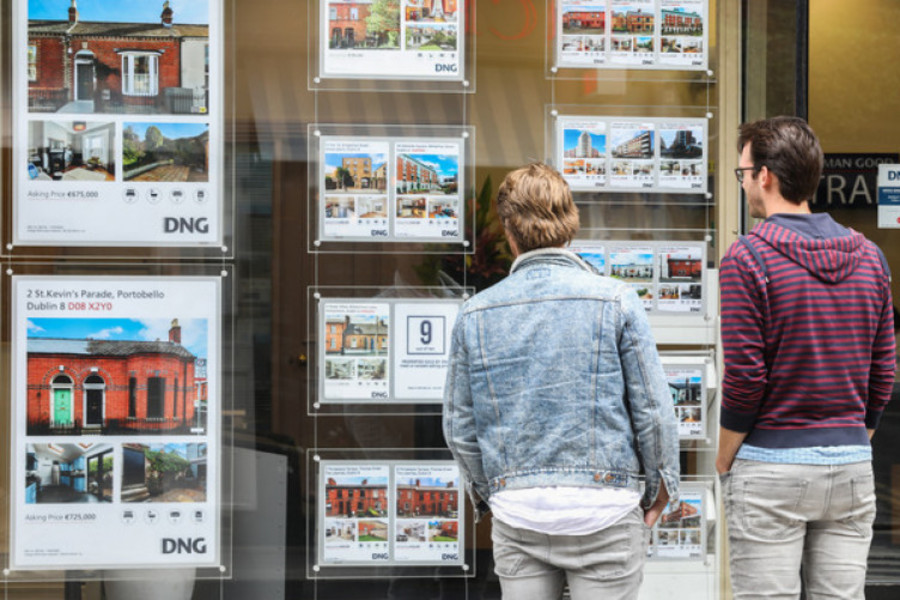 Members of the public view house prices in a Douglas Newman Good auctioneers window
Source: Leah Farrell / RollingNews.ie
The highest increase in property prices were seen outside Dublin, with prices rising by 16.4%.

RESIDENTIAL PROPERTY PRICES have grown by 14.2% nationally over the last 12 months to April 2022, according to new figures from the Central Statistics Office.

The rise in prices is slightly below increases reported last month - the highest increase in seven years - where it increased by 15.1% in the year to March 2022, a drop of 0.9 percentage points.

This is the first time the rate of residential property price increases have decreased in two years.

Within Dublin, the highest price growth was seen in Dublin City, where prices rose by 12.7%.

The highest increase in property prices were seen outside Dublin, with prices rising by 16.4% in the year to April 2022.

The Border region saw a significant increase in price, going up by 22.1% while the Mid West saw an increase of 11.7%.

In a statement reacting to the latest figures, Trevor Grant, Chairperson of the Association of Irish Mortgage Advisors said that it was unlikely that property values would drop in the near future due to demand outstripping supply.

“Supply is steadily increasing which should ease property price growth, but on the other hand, the increasing cost of raw materials and as well as growing labour costs may continue to add to the upward price pressures,” said Grant.

“Prospective homebuyers are looking to know whether they should move now or wait it out, in the hope that prices might soften.

No-one can say with any degree of certainty what’s going to happen to prices, but there definitely appears to be scope for further increases, so if you’re in a position to buy now – and particularly, if you’re currently renting, then it might best to push ahead with your plans.