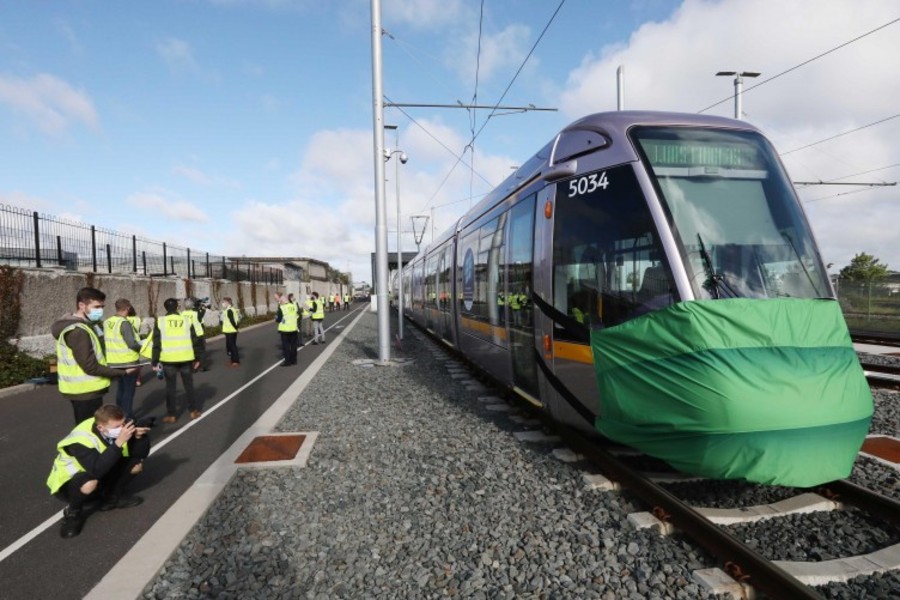 Source: Sasko Lazarov / RollingNews.ie
The 4km extension would create four new stops on the green line alongside a cycle and pedestrian path.

THE PUBLIC HAVE been asked to submit feedback on plans for Luas Finglas, which would see the Luas Green Line extended from Broombridge to Charlestown on a grass track.

The 4km extension would create four new stops on the green line and is to be constructed mostly in grass track to create a “sustainable” transport link, with a cycle and pedestrian path to be built along most of the extended line.

Minister for Transport Eamon Ryan said that he was “pleased there will be a pedestrian and cycling path along most of the route”.

“The government is committed to improving sustainable public transport,” he said.

The plans include a 600-vehicle park and ride facility at Charlestown, the final stop on the extension.

Anna Graham, CEO of the National Transport Authority, said that the extension was an example of the “progress we are making in planning to invest in ambitious and exciting sustainable transport solutions”.

“I believe that Luas has the potential to be transformative for this part of the city and will further enhance the area for people who live here, work here, or want to run a business here,” Graham said.

“We are anxious to get feedback on this proposal, so I encourage members of the local community to engage with this consultation process and let us know what you think.”

It is expected that the extension would bring 30,000 people within 1km of a new Luas stop.

The consultation process on the Luas Finglas extension is operating virtually.

Fianna Fáil TD for Dublin North West Paul McAuliffe said that the government should consider adjusting the timescale of the extension plans.

“News of a planned Luas extension to Finglas is very welcome to the area but I would appeal to the new Government to bring the construction phase forward from a post 2027 project to an earlier construction date,” McAuliffe said.

He said that he would like to see the extension go beyond Charlestown and link with the proposed Metro North in Ballymun to connect the area to Dublin Airport.

“The next step for the new government must be to bring the construction phase forward from a post 2027 project to an earlier construction date,” he said.

In addition to announcing plans for the Luas extension, the first of eight new 55m trams is being introduced into service, with the other seven due to be in service by early 2021.

The 55m trams can carry around 100 additional passengers compared to existing 44m trams.

13 of the original 44m trams have already been converted to 55m, with a further 13 still to be converted.

The new and converted trams are expected to increase capacity on busy sections of the Luas network by almost 30%.