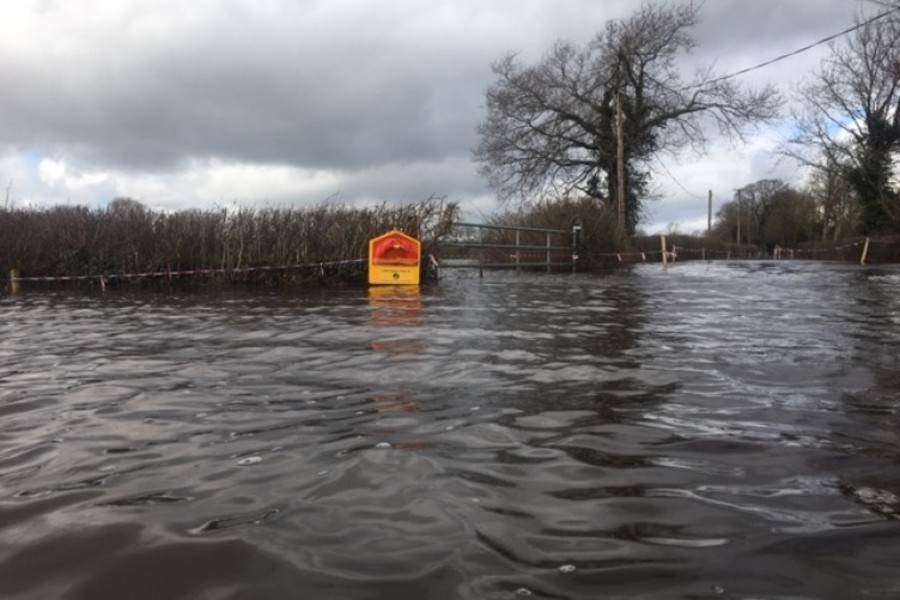 Clonlara has been badly hit by floods.
Source: David Raleigh
A plan to construct a flood defence and pumping station to divert water away from the area have been left marooned.

FAMILIES IN FLOOD-HIT Clonlara have called for the government to buy them out of their swamped homes.

Springfield, which lies between Limerick city and the ESB-operated Parteen Weir, has been devastated by flooding six times in the past 25 years.

A plan to construct a flood defence and pumping station to divert water away from the area have been left marooned.

Peter Sweetman, a son of former Minister for Finance Hugh Gerard Sweetman, objected to the development, claiming the proposed Flood Mitigation Scheme “did not comply with the habitats directive”.

The Council withdrew the plans, redrew their application, and are due to re-submit the planning file in three weeks.

Limerick couple Mike and Liz Hogan and their four children were evacuated to a hotel last Friday after the River Shannon engulfed access roads to their Springfield home.

“We’d go in the morning if we got as buy out. The floods are getting worse every time. We have to get out of here,” said Mike.

The family are staying in the Castleoaks Hotel in Castleconnell for the foreseeable future as their home is cut off by floodwater.

“I went as far as i could yesterday to try and get to the house but the water level was up to my waist and I couldn’t get down. The current was actually pushing against me, it was too dangerous, so I turned back,” said Mike.

In 2015/2016 their home was “destroyed” when contaminated floodwater overwhelmed their septic tank and Liz’s car was flooded.

“The s**t worked its way back up into the house. It came back up through the toilets and out onto the floors. We were out of the house for eight weeks. When we went back in to clean it up it was destroyed.”

“We still have to pay our mortgage.”

Springfield mother-of-three Bridget Kinsella, who was widowed in recent years: “I want the Council to buy us out. I want out of here. I love the nature and beauty of the area but I can’t stay here when this misery comes to my door every few years.”

Limerick couple Dave and Shirley Mulcahy agreed they would also move out, if a proper flood defence was implemented.

“If they could fix it great but I don’t think they can,” said Shirley.

Families continued to pump water from around their homes as the ESB announced it was increasing water discharge rates from the Parteen Weir to maintain safety levels in the dam.

Other families who were born and bred in the community said they wish to stay.

Members of the Defence Forces, Limerick Fire Service, and local Civil Defence crews are now embedded in Clonlara, Castleconnell, Mountpeilier, and Annacotty, where local residents are fighting a rising tide.

Limerick Green Party TD, Brian. Leddin, who is also an engineering expert in hydro-generation, has called “for a review of the operation” of the ESB-operated Ardnacrusha power station and Parteen Weir “in order to determine its role in flood management in the Limerick area.”

“There is a question as to whether the ESB could have been releasing greater volumes of water via Parteen Weir in the preceding weeks and months in order to mitigate the flood risk in the event of heavy rainfall.”

A ESB spokesman responded: “ESB cannot hold back water at Parteen Weir in a flood situation as there is no capacity to hold this water. If water is not allowed to pass there is a risk to dam and embankment safety and even greater risk of flooding.”

“Before the discharge is changed at Parteen Weir into the River Shannon, the relevant local authorities are informed and relevant stakeholders, including local residents, are texted.”

Local river tributaries can augment discharge rates increasing the flow “in less than 12 hours without any prior notice to landowners/householders”.

“ESB can only manage the flow of water as it arrives at Parteen Weir.”

“If there was no generating station at Ardnacrusha the full flood would be flowing down the old course of the Shannon river and downstream flooding would be more severe.”

“The management of flood risk on the River Shannon is led by the OPW, through the Shannon State Agencies Coordination Group. ESB is a member of this group and works with the other members to improve coordination and to develop and deliver an agreed work programme.”