Explainer: What is the Taoiseach's Shared Island Unit up to?

Gráinne Ní Aodha 17/03/2021
Cross-border transport, Ulster University’s Magee campus, and an all-island research hub are some of the concrete proposals the Unit are looking at. 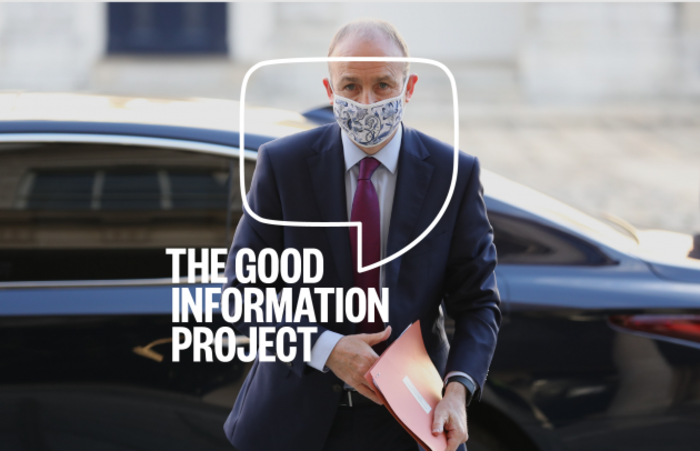 This article is part of The Good Information Project, a new initiative from The Journal to help create greater understanding of big issues we face. This month we are focusing on the question ‘What could a shared island look like?’

The question for us all is: What future do we want for our children and grandchildren on our shared island?

TAOISEACH MICHEÁL MARTIN’S Shared Island Unit, based in Dublin Castle, has been quietly researching “the nuts and bolts of issues” on the island of Ireland, and how they could be improved.

Launched in October and outlined in the Programme for Government, the Taoiseach said that he was making €500 million available for the next five years to research ways of “deepening North-South cooperation” and building a “shared island agenda”, among other things.

Headed by Aingeal O’Donoghue, a former civil servant from the Department of Foreign Affairs, the unit also has principal officer Eoghan Duffy, and two other staff members working for it. There are also plans to hire two or three more staffers.

The civil servant-powered initiative is also looking at how to develop the all-island economy; an all-island climate strategy; investing in the North West and border regions; and commissioning research to “support the building of consensus around a shared future on the island”.

The Unit is working with the Economic Social Research Institute (ESRI) on commissioning the “comprehensive research programme”, particularly focusing on the economy, health and education on the island. The National Economic and Social Council will also produced a report, and has already completed a scoping report.

This would be done in talks with the British government and Stormont Executive.

“It is a broad, positive and practical agenda,” the Taoiseach said upon its launch. “All sections of society, North and South – nationalist, unionist or neither – can engage with this fully and confidently.”

Among the Unit’s tasks is to begin ‘fostering dialogue’ on what a shared island could be.

What this means in practice is a series of online discussions about what a shared island should look like, encouraging participation from people who have been underrepresented in the debate according to the Taoiseach: young people, women, and new communities. 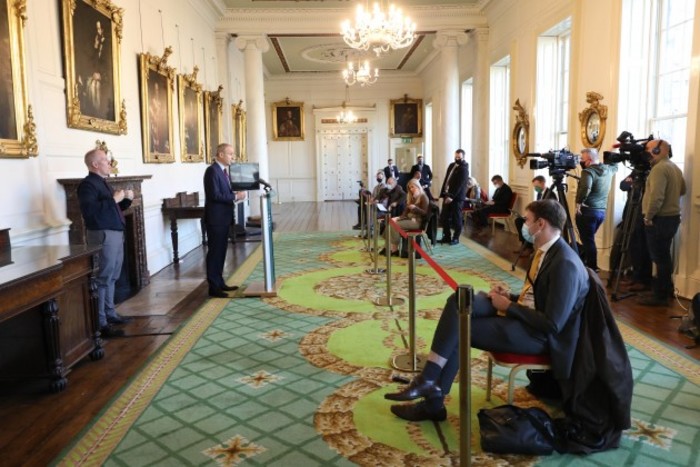 Taoiseach Michael Martin speaking to the media after he gave an address on the Shared Island Unit last October.
Source: RollingNews.ie

The first of these events was held on 26 November, and focused on young people’s views: ‘New generations and new voices on the Good Friday Agreement’.

During the month of December, “roundtable discussions” were held with women’s representative groups and ethnic minority communities both sides of the border.

The second dialogue was an ‘Environment and Climate – addressing shared challenges on the island’ held on 5 February, chaired by Minister Eamon Ryan and where 100 participants were in attendance.

Other ‘dialogues’ will be held throughout this year, including issues such as the environment, health, education and economy, as well as identity and equality.

Appearing before an Oireachtas committee on the Implementation of the Good Friday Agreement in November, Aingeal O’Donoghue said that they had some engagement with the unionist community on their views.

“We have had quite bit of engagement with civic unionism and, although I do not want to put words in people’s mouths, a level of response that we have found heartening.”

Among the more detailed projects the Unit is looking at, are:

“There are particular knowledge bases across the island on moving to a carbon-neutral economy, cyber security, food security, as well as next generation cancer treatment and biomedical devices,” the Taoiseach said about the development of scientific ties.

O’Donoghue, at the committee, said: “Professor Deirdre Heenan made a very strong point about the research basis we need to promote further health co-operation on the island. It is that sort of work. It could be on a sectoral basis or on the broader all-island economy.

“It will certainly involve climate change and biodiversity issues. We expect to see some early work around issues like climate and good jobs and what that means for the island, but there will be a broader and more sustained programme of research as well.”

A look at the effects of Brexit on jobs and deprived areas will also form part of this work.

Among the organisations that already operate on an all-island basis are the energy sector, the agriculture sector, the Irish Congress for Trade Unions, and tourism.

It’s also important to note that the Shared Island Unit stops short of, but may be a precursor to a joint Oireachtas committee on Irish unity, and the setting up of an all-island Citizens’ Assembly, both of which Sinn Féin have called for since the Unit’s inception.