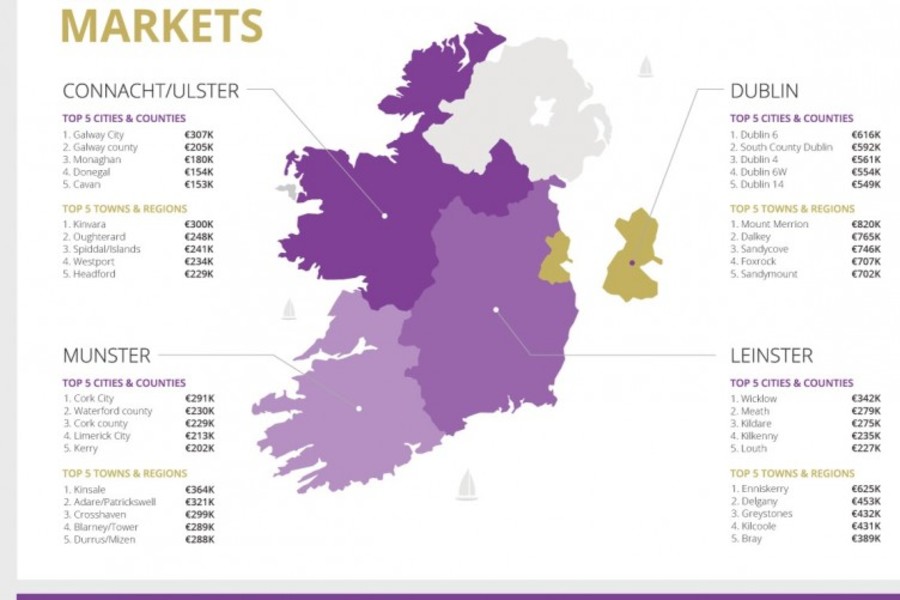 Infographic of the most expensive housing markets across Ireland
Source: Daft.ie
The national average asking price for a house is €264k.

THE TOTAL VALUE of all Irish residential property now stands at €536 Billion, shooting up by €18 Billion on 2019.

According to the Daft.ie 2020 H2 Wealth Report, there was a daily increase of €50 million on the total value of Irish residential property.

Dublin remains the home of the most expensive housing markets in the country, with the highest being Dublin 6, where the average price of a house is €616k. Closely following behind is South County Dublin at €592k and Dublin 4 at €561k.

In comparison, the average asking price nationwide lands at €264k.

The two least expensive markets are Bundoran in Co Donegal at just €91k, followed closely by Castlereagh in Roscommon at €96k.

Speaking on the findings of the report, Trinity College economist Ronan Lyons said that the 50m increase in value daily was not caused by the completion of new homes, but by existing house prices rising.

“If you had surveyed 100 economists at the start of the year, when there was only the first inklings of the potential impact of Covid-19, I doubt whether any – in all honesty – would have predicted that such an economic shock would have caused property prices to rise, not fall, but yet that is what happened,” said Lyons.

The most expensive streets in Ireland are also all located in Dublin, with Temple Gardens in Rathmines taking the top spot. Three houses were sold on the street for more than €2 million euro, with an average price tag of €3.1 million.

Second on the list fell to Thormanby Road in Howth, where three properties were sold over the last two years, with an average price of €2.8 million.