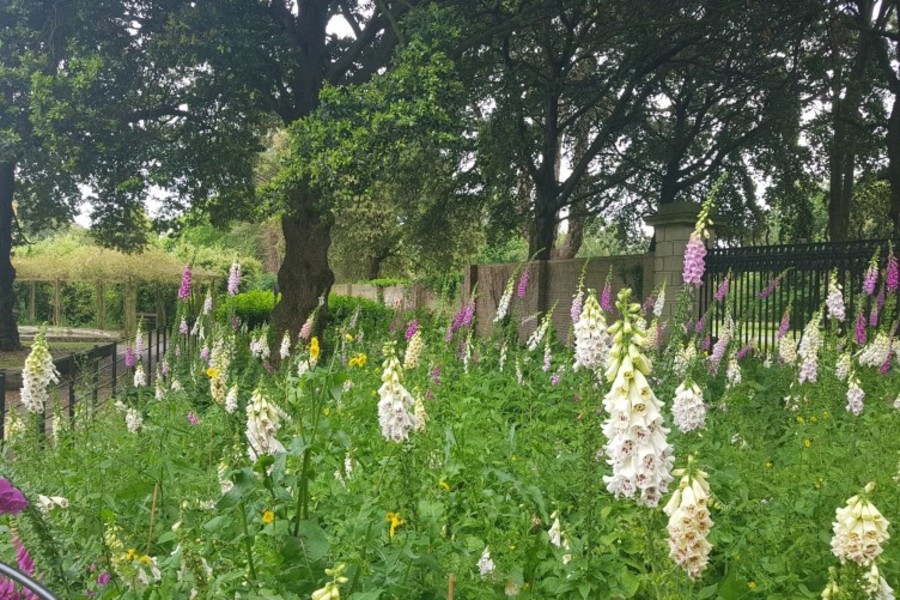 Foxgloves in St Annes Park, Dublin
Source: Dublin City Council
The council said that many parks, and all playgrounds, are now chemical-free.

REDUCED MOWING, PHASING out chemicals and improved planting is part of Dublin City Council’s plans announced this week to improve biodiversity in the city.

The plans include the gradual ‘wilding’ of amenity grasslands in its parks, open spaces, roadside verges and graveyards to allow wildflowers, which in the past have been considered weeds, to flower and seed.

Mowing regimes in the peripheral areas of parks and on verges have been adjusted to allow the grasses and suppressed wildflower species such as clover and dandelion to grow and provide habitat and food for insects, bees and other pollinators.

Along with the new wilding policy, the council has ended its use of the chemical glyphosate as a herbicide. The use of all such chemicals has been significantly reduced over the last four years.

The council said that many parks, and all playgrounds, are now chemical-free.

Speaking to TheJournal.ie about the benefits of wilding, Irish Wildlife Trust coordinator Kieran Flood said: “When you cut the grass less and use fewer chemicals you’ll get more wildflowers and that will attract more insects.

“[Dublin City Council] is managing their grasslands in a way that’s more wildlife-friendly. Certainly, that’s something that could make a significant difference and is very welcome.”

The reduced frequency of mowing in many areas of the city has now been supplemented by the mass planting of bulbs to take areas out of the mowing cycle for a number of months, Dublin City Council chief parks superintendent Les Moore said.

“These bulb mixes that herald the arrival of spring are visible at the moment and include muscari, gladiolus, camassia, tulips and allium, as well as daffodils,” Moore said.

“These combinations of bulbs flower well into May and are cut back mid to late June. We are also trialing various wildflower seed mixes which will last well into autumn and would require cutting only once a year.”

DCC biodiversity officer Lorraine Bull added that “the support of local people is critical in this journey as a traditional scorched earth policy of eliminating every ‘weed’ must change”.

Although aesthetically this means that ‘weeds’ will be more evident, wildflowers are an essential food source for bees and many insects which, in turn, feed into a wider ecosystem.