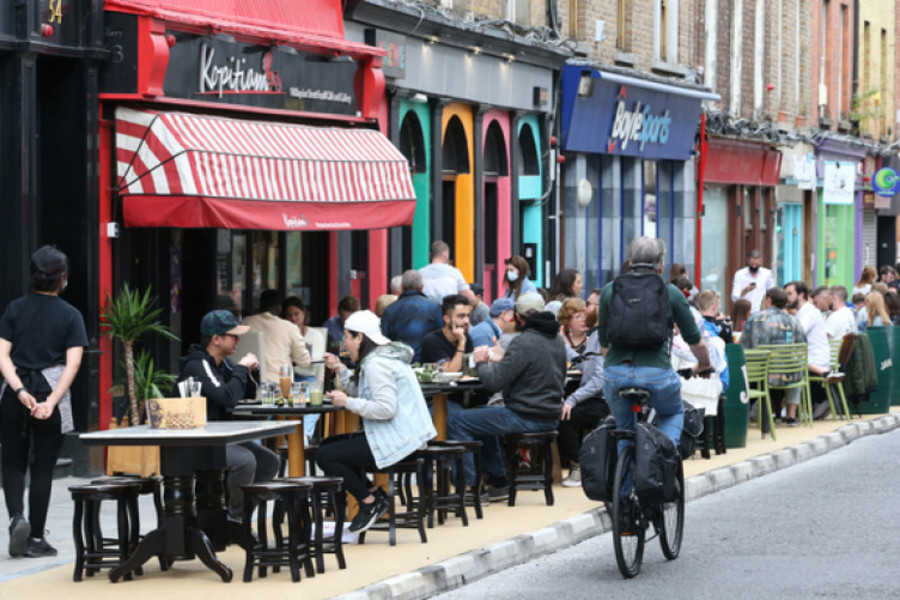 A TRAFFIC-FREE TRIAL of two major Dublin streets is being extended for another four weeks following opposition to the measure coming to an end.

Capel Street and Parliament Street, two streets in the city centre near the quays, have been closed to vehicles on weekend evenings since the middle of June as part of a trial by Dublin City Council.

The trial, which was originally due to end in July, was first extended for another six weeks.

Dublin City Council said on social media last night that the trial would end this weekend in line with the plan that was set out, adding that 300,000 people used the streets while they were pedestrianised.

However, many councillors, businesses and locals wanted to see the streets remain traffic-free, arguing that the large number of people who used the streets showed that the trial was a success.

Earlier today, Dublin City Council told The Journal that if there was a “desire to continue the traffic-free weekends”, it would work with stakeholders and committees to decide if it could or should be continued and for how long.

Now, the council has announced that the trial will continue for another four weeks until 26 September.

It said that the decision was made after representations by the Lord Mayor Allison Gilliland and other councillors.

Next Monday, a public consultation will open to hear people’s views on the traffic-free streets scheme.

Speaking to The Journal, Green Party Councillor and former Lord Mayor Hazel Chu said that pedestrianising the streets is a “great opportunity for us to look at how we completely change the city from what it was before to something that is a lot more pedestrian friendly, a lot more sustainable when it comes to transport, and a lot more amenable for businesses as well”.

“A lot of businesses have told me that they have a better uptake with pedestrianisation, so this is a better opportunity to support them as well,” Chu said.

Her colleague, Green Party council group leader Michael Pidgeon, agreed: “I think it’s pretty unambiguously a great success, so that’s why we should extend the trial in the short run and make it permanent in the long run.”

He had made a proposal earlier today for city councillors to jointly ask for the trial to be extended.

“As things are reopening and while weather is still good, it seems a particularly bad time for the trial to finish up and it would be no harm to extend it for at least another six week period.”

Fine Gael councillor Ray McAdam also said that the trial was an “overwhelming success this summer”.

McAdam wrote to Lord Mayor Allison Gilliland to ask her to support an extension of the current measures.

Additionally, he “asked her to ensure that the issues surrounding Capel Street are included on the agenda of the September city council meeting, so that we have some information or data as to assess the success or otherwise of the trial this summer, but also we need to know what cost is involved and what the footfall has been like”.

McAdam said that a working group should be established to create proposals for the longer-term and present them to the council later this year.

“This report will be presented to the elected members for their consideration with options for how changes in these streets could be made more permanent subject to the appropriate process and further consultation.”

Bump in the road

The main opposition to pedestrianising Capel Street, the councillors said, was maintaining access for locals.

“I support the pedestrianisation of Capel Street, but I know that there are particular problems ensuring, for example, people being able to access their homes,” McAdam said.

“Because of the intricacies on Capel Street, we need to look at what will be the challenges to increased traffic. The Lord Mayor has said that it’s a main traffic artery in the city – I don’t agree with the Lord Mayor’s characterisation,” he said.

“We can’t continue to have it whether car is dominating the streetscape, but equally, we need [to think about] the people who live in the area.”

Chu said that a “lot of that access [for residents] was formed back in the day when apartments were built and planning was made”.

“Once we look at new plans, how we build and where we build, we need to look at how people move around and how we change the city to make sure it’s more residential friendly and not using our car.”

The two streets are largely populated by restaurants and cafés, many of which have been able to use the extra road space to facilitate outdoor dining.

The Restaurants Association of Ireland wanted to see the traffic-free measures continue.

RAI chief executive Adrian Cummins told The Journal that pedestrianisation has worked “extremely well” for restaurants, pubs and hospitality around the country where it’s been facilitated and promoted by local authorities.

“The Restaurants Association of Ireland is calling on Dublin City Council to continue the pedestrianisation of Dublin areas during the autumn and winter,” Cummins said.

“It’s imperative for businesses this happens as the pandemic isn’t over yet and the public really want the opportunity weather permitting to sit and socialise outdoors.”

Similarly, Donall O’Keeffe, chief executive of the Licensed Vintners’ Association told The Journal that “given how strongly the pedestrianisation has been supported by both the public and businesses in the area, we hope that it will be extended”.

He said that the pedestrianised streets helped pubs and hospitality when they reopened outdoors, and that while there are still restrictions on businesses, “all additional space is so important”.

“Some of these businesses are only back up and running two or three months after previously being closed for a period of 16 or 17 consecutive months and there are no clear dates as to when they will be allowed to trade normally once more,” O’Keeffe said.

“Taking all these factors into account it is clear to see the benefits provided by this pedestrianised space and we hope that these measures will be extended.”

CEO of the Vintners Federation of Ireland Padraig Cribben said that “the extra space was crucial to the viability of many outlets over the summer and continues to be so”.

Dublin City Council quickly attracted a large response on Twitter yesterday evening when it said that the trial was coming to a close.

Much of the reaction came from people supporting the pedestrianisation who questioned why it was ending despite its popularity.

Some councillors believe that the council needs to improve how it communicates with the public.

“I think the city council has improved its communication, particularly on social media, in recent months, but I think the way in which the council said in the tweet that it’s coming to an end – I think we should have been able to communicate that better in terms of ‘the trial has been in place for 12 weeks, what’s next for Capel Street?’” McAdam said.

“The council missed a trick there, and as a result of that, that’s led to all the discussions that have been had last night and this morning on Twitter,” he said.

Hazel Chu said that she can “see the frustrations from the community” but that she doesn’t believe the council’s statement was meant to “deliberately kill off any possibility”.

“With the various lawsuits and issues with pedestrianisation around the city, when DCC say they’re going to do a trial, they try to stick with it so that no one can claim they’re just bypassing trials [to introduce something permanent],” Chu said.

“From their point of view, they can’t just make something permanent, because whenever they’re seen to remotely do that, even if they’re not, there are objections and court cases taken out over it.”

“They do things by the book and try to make possibilities happen.”