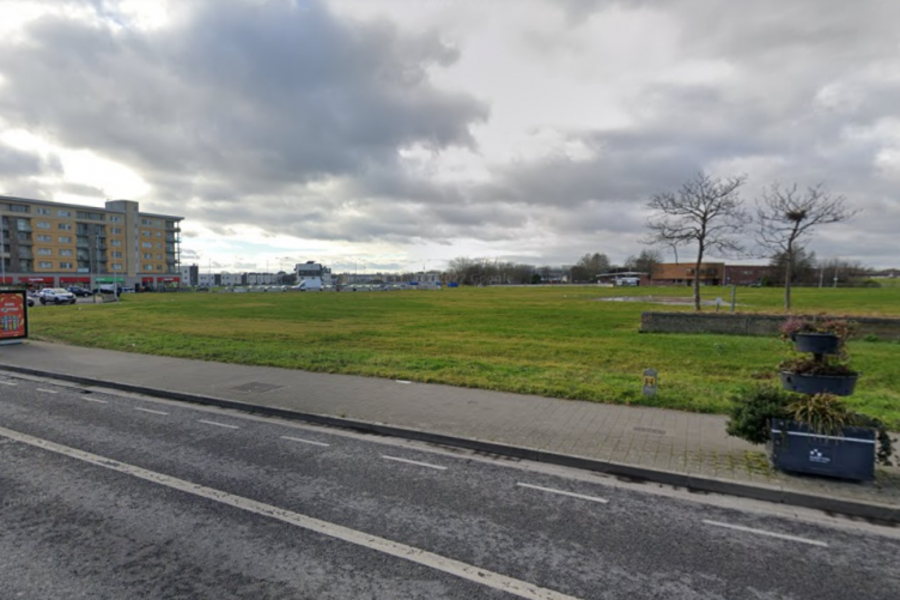 The current site of the former Ballymun Shopping Centre.
Source: Google Maps
Plans have been proposed for 300 residential units and 41,000 square metres of commercial and mixed use for the site.

DUBLIN CITY COUNCIL (DCC) is to begin seeking expressions of interest from developers for the development of the site of the former Ballymun Shopping Centre following the “successful” demolition of the building.

Demolition began on the former shopping centre in 2020, with the work being fully completed last year.

In accordance with the Ballymun Local Area Plan 2017, DCC have proposed dividing the land into two sites: Site 1A and site 1B.

There are also plans to incorporate a Metrolink station on the site. The Metrolink is currently expected to be completed in 2034.

In the short-to-medium term, the council wants to encourage temporary uses on the site, including pop-up food and craft markets alongside amenities like funfairs and an ice-rink. 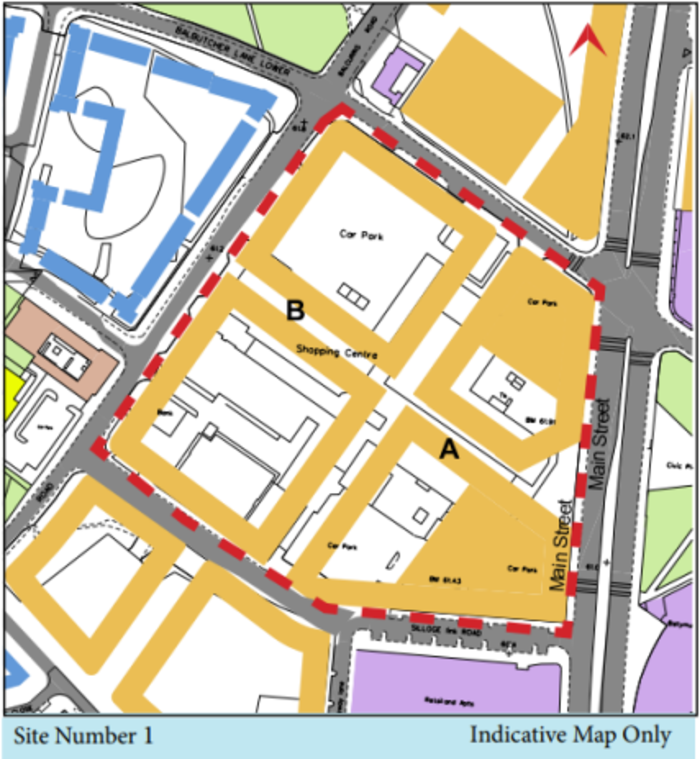 A map of the proposed plans for the development of the site.
Source: Dublin City Council

“The aim is to provide a local destination and community use; to bring people into the area from the immediate hinterland and to foster a positive image of the site, helping to reimagine the space in the minds of retailers and residents alike,” the report says.

A pilot project is also proposed for May and June of this year, depending on interest.

Independent councillor Noeleen Reilly is hoping that a fun fair will be provided on the site for the May Bank Holiday this year.

Speaking to The Journal, she said: “That’s a short term objective, and certainly I welcome that because it brings a vibrancy to the town which is badly needed and will support the businesses here.”

“It’s such an important site for Ballymun. It’s in the heart of our town and it’s really, really important what goes there because for so long, there was just that derelict shopping centre there and it just gave a really bad image of Ballymun, particularly after coming out of the regeneration.”

The regeneration of Ballymun was first announced in 1997. It was divided into two phases – a re-housing programme and an urban regeneration programme.

The demolition of the Ballymun flats, built in the 1960s to accommodate the rising population, began in 2004, setting the plans for the area’s regeneration in motion.

Following a lengthy pre-planning process, Richard Barrett and Johnny Ronan’s Treasury Holdings unveiled plans for a €800 million retail facility in 2008, which included 367 apartments, an 11-screen cinema and a bowling alley.

Work was due to begin on the project the following year. However, the regeneration was never completed due to lack of investment, which was then followed by the recession.

Ballymun Regeneration Ltd was wound down, and Treasury Holdings was acquired by NAMA. The council bought the shopping centre land in 2014, but community facilities planned for the area, including the proposed new shopping centre, were never built.

“You can understand people’s frustration during the regeneration and what they were promised. We’re nearly 30 years on from that and the climate is just so different, particularly with online shopping,” Reilly said.

I’ve always felt it was a huge mistake not developing the town centre first. When people talk about the promises not being delivered, it’s the town centre that they mean.

People got replacement homes and there were some good community centres built, but the one thing that people will say is: ‘We never got our shopping centre’, and there’s a huge legacy issue around that in the area.

“I’m not sure that it’s achievable to get the shopping centre that was promised all those years ago, but I do think it certainly should be achievable to get an absolutely good mix of different shops in the area for people,” she said.

Reilly said she is hopeful that someone will come forward with a plan of a mixed use development with accommodation and retail units.

“I think that would be a really good outcome for the town. Our housing lists are bursting at the seams. We need to provide homes for people and we also need to provide them facilities as well, and I think providing homes will support any business that comes into the area, and that’s crucial,” she said.

She said it’s important that any properties built are a mix of owner-occupier and council residences.

“I wouldn’t be in favour of someone coming in and buying them and renting them out on HAP. We have huge issues with that happening across the area and huge issues with antisocial behaviour on that, as well as issues with the landlords not keeping their properties. Some people are living in dire situations renting privately,” she said.

“They have some security with the council. The council will always look after their properties as best as they can, but I also think there is a real need to provide affordable homes for people to buy in the area. Not everybody qualifies for council housing.”

A spokesperson for the Department of Housing told The Journal: “Delivery of affordable housing, in accordance with the schemes set out in the Affordable Housing Act, 2021 and the funding being made available, will be underpinned by local authorities’ Housing Delivery Action Plans. Local authorities including Dublin City Council submitted initial affordable plans to the department last December.

“The Plan is being revised and updated by Dublin City Council in the light of ongoing engagement and clarifications, and the Department expects that it will be ready for publication before the summer. The Plan will provide a comprehensive overview of projected delivery of affordable housing across Dublin City, including in Ballymun,” the spokesperson said.

The department understands that Dublin City Council anticipate delivery of affordable housing in a number of sites in the Ballymun area. Schemes planned for Balbutcher and Sillogue are in early planning stages, the spokesperson added.

Reilly said the shortage of owner occupiers in the Ballymun area really needs to be addressed.