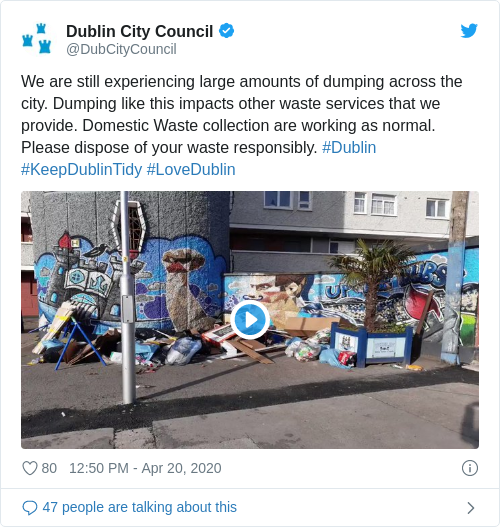 We are still experiencing large amounts of dumping across the city. Dumping like this impacts other waste services that we provide. Domestic Waste collection are working as normal. Please dispose of your waste responsibly. #Dublin #KeepDublinTidy #LoveDublin pic.twitter.com/2JiW8PfZXS

DUBLIN CITY COUNCIL has said that there has been an “unprecedented and unacceptable” increase in illegal dumping of household waste and other items since the shutdown was announced.

The council said that it had received a 50% increase in requests to address illegal dumping since 1 April, in a statement given to TheJournal.ie on Monday. This is compared to the same four week period in 2019.

In March 2020, there was a 30% increase compared to the same period last year.

“This illegal and anti-social activity is negatively impacting neighbourhoods, communities and the environment of the city,” a spokesperson said.

Councils have been trying to tackle incidents of littering and illegal dumping since the lockdown began: Dublin City, Galway City and Waterford City Councils have seen increases in face masks and disposable gloves being thrown on the ground.

Waterford City and County Council has seen a 20% increase in the number of complaints about illegal dumping compared to last year, while Galway City Council has also experienced a significant increase in dumped items.

But some recycing centres or ‘bring centres’ have also closed or partially closed due to restrictions aimed and slowing the spread of Covid-19, and also because of council staff being redeployed because of additional need in other areas. 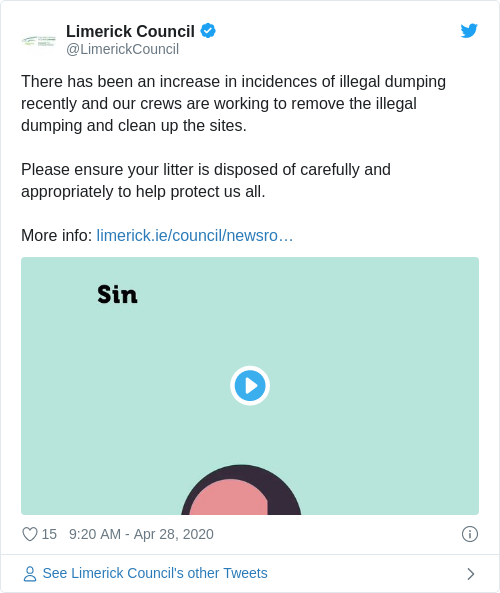 Please ensure your litter is disposed of carefully and appropriately to help protect us all. 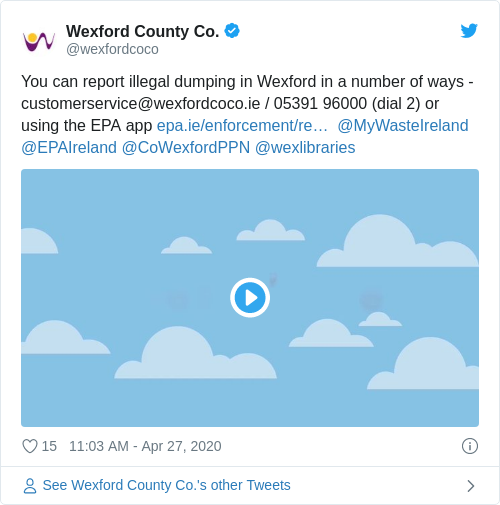 On 22 April, Minister for Communications, Climate Action and Environment Richard Bruton announced that €1 million of funds from the Anti-Dumping Initiative will be ring-fenced to support efforts to tackle a reported increase in illegal dumping during the current Covid-19 crisis.

The funding will be used for waste removal and the installation of CCTV or other monitoring and surveillance equipment, among other activities.

Bruton said that he was “extremely concerned” with reports of an increase in illegal dumping during the Covid crisis.

“By providing local authorities with advance funding we will ensure they can respond quickly and decisively. Illegal dumping is committed by a minority but is a scourge on local communities,” he said.

Dublin City Council said that its enforcement services “are actively investigating waste offences and where evidence is found enforcement action is taken”.

We are preparing proposals to access the anti-dumping initiative funding available from the Department of Communications, Climate Action and Environment to increase our capacity to identify and tackle offenders, address non-compliance with waste bye laws and eliminate ongoing dumping at problematic sites in the city.

A spokesperson for the Department of Communications, Climate Action and Environment said that since the introduction of the Anti-Dumping Initiative in 2017, funding of €6.3 million has been provided which has supported over 700 projects across all 31 local authorities and removed 10,000 tonnes of illegally dumped waste.

“In this, we have been supported by community and voluntary groups across the country who have acted as a bulwark against the spread of this behaviour.

“It is of critical importance that these efforts are safeguarded and that the progress that has been made in addressing this problem protected and it was in this context that the Minister ring-fenced one million euro of the 2020 ADI allocation to combatting illegal dumping activities associated with these challenging times.”

Liz Canavan from the Department of the Taoiseach highlighted a new national awareness radio campaign in relation to illegal dumping, but added that enforcement was for local authorities to manage.