Developer of 1,600 units open to leasing to DCC despite council's 'alarm' at build-to-rent scheme 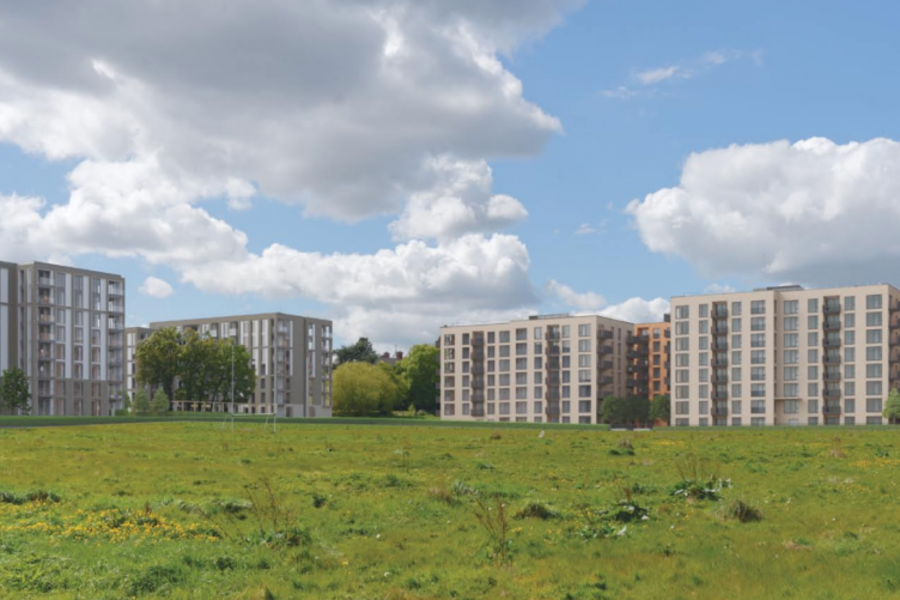 Source: https://holycrosscollegeshd.ie/reports/other-reports
There has been much local opposition to a scheme in Drumcondra, which was approved this week.

A DEVELOPER PLANNING to construct 1,600 build-to-rent apartments in Drumcondra in Dublin have said the company is “open to whatever leasing or purchase arrangement” Dublin City Council may propose.

The construction of nearly 1,600 build-to-rent apartments on the grounds of the former Holy Cross seminary was approved by An Bord Pleanála earlier this week.

US property group Hines plans to build 12 apartment blocks up to 18 storeys high on the site on Clonliffe Road, close to Croke Park.

The proposal has been the focus of significant public opposition in recent months.

A five-storey extension to the old seminary building, which will be converted to apartments, is among the 12 planned buildings.

There will also be nine buildings between four and eight storeys tall, one 13-storey building and one 18-storey block.

The US developer proposed that 1,614 apartments would be built on the site, of which 70% will be one-bedroom units.

However, 33% (540) of the apartments will be studios that are 37.8sqm in size, and have been described as similar to “hotel rooms” by some architects.

Social housing accounts for 10% of the development, while under the purchase arrangement it was agreed a further 10% would be earmarked for social and/or affordable housing.

The company added: “Hines will work in partnership with the council and whatever approved housing body (AHB) it selects to oversee the social and affordable aspect of the Clonliffe scheme.

“Hines is open to whatever leasing or purchase arrangement the council may propose in this regard.”

Dublin City Council previously described the scheme as “alarming” and “unbalanced” due to the high proportion of one-bed apartments.

Criticism has been levelled at the State over its reliance on expensive social housing leases, where local authorities do not own the properties after the lease expires. Many politicians have said that such an arrangement is “bad value for money”.

Rents for for the studios were “projected” to start at €1,350 per month back in March 2020, but are predicted to reach at least €1,500 given rent inflation in the last year, with rent for the one-bed and two-bed apartments expected to be higher.

However, the developer also said that rents for the private rental apartments in the development “will be in line with market rates “.

“The designated AHB will determine the rents in respect of the social housing if Dublin City Council decide that rental is their preferred option,” the company said.

‘Stop Holy Cross College’, a local group that has opposed the development, say the scheme will create profits for overseas institutional investors at the expense of local residents.

“The return of absentee landlords is not a solution. It is a reversal of 100 years of social progress,” the group said.

Sinn Féin leader Mary Lou McDonald, who is also a TD for the area, told The Journal that the development will “cram people” into housing.

“There is a desperate need for affordable housing in Drumcondra and in Dublin Central more generally. This development does not meet that need,” she said.

“It is the wrong development for the community; who have made their voices heard in opposition to this development.

What is needed are affordable homes for workers and families to buy in the area, not a development comprised solely of small, unaffordable build-to-rent apartments that’s sole aim is to cram people into this development for maximum profit.

The Journal also asked Minister for Finance and TD in the constituency Paschal Donohoe to give his views on the controversial development, but a spokesperson said the minister had no comment.

However, Fine Gael Senator John Cummins, the party’s spokesperson for housing in the Seanad, hit back at McDonald’s claims, claiming that the Sinn Féin leader believes that increasing housing supply “would somehow make our current housing crisis worse”.

“What sort of warped logic is that?” he said.

“While I, of course, respect people’s right to object to developments, it galls me to see the likes of deputies Gary Gannon and Mary Lou McDonald openly oppose housing developments while, at the same time, claiming their parties in Government would solve the housing crisis.”

Cummins said that housing supply was “one the few matters” people agree on with regard to the housing crisis.

Earlier today, a new report from Daft.ie revealed that the number of housing units available to rent across the country on 1 November was an “all-time low”.

“Every housing unit, whether for owner-occupiers or people to rent, has a positive effect on resolving the housing crisis,” Cummins said.

“It has a circular effect. If individuals move into a build-to-rent apartment from having lived in a shared house, that house will be freed up for a family to move into and that has a positive impact.”

Trinity College Professor Ronan Lyons, who authored the Daft.ie report, also suggested that build-to-rent could play its part in alleviating aspects of the housing crisis.

He told RTÉ’s Morning Ireland today that tens of thousands of new build-to-rent units which are coming on stream could collectively help with the rental situation in the Greater Dublin area.

However, architects such as Rob Curley have criticised such developments as being “developer-led planning” and “design by spreadsheet”.

“Sustainable urban development is integrated into communities with varied options for rent and ownership for mixed incomes, not high-rent ghettos,” he said on Twitter.

“This scheme sets a terrible precedent for urban development in Ireland. It willingly breaks the DCC development plan in terms of the size of the units and the mix of unit types.”

“The breaches of the development plan have a serious impact on the building design and the internal apartment design. Economically, the build-to-rent financing model will drain hundreds of millions of euros out of the country over the lifetime of the development,” he added.

There has also been concerns raised about how the development was granted permission in the first place.

To obtain planning permission, Hines went directly to An Bord Pleanála with the application for the development under what is known as a Strategic Housing Development.

This process, due to be discontinued next year, allows developers to bypass local authorities for planning permission if housing developments are large enough.

The Government plans to replace the Strategic Housing Development (SHD) process, which was introduced in 2017 in order to speed up delivery of units.

The SHD process has been criticised for excluding local authorities from the planning process, and a large number of such projects have been overturned by the courts in recent years.

A number of politicians have said the system bypasses the democratic process, though it is perfectly legal and has become a key part of Ireland’s planning system in recent years.

The system is set to end from next year, but some feel that that date isn’t soon enough.

“Contrary to what Minister O’Brien is saying, the flawed SHD planning legislation will unfortunately be with us through most of 2022, with the process open for planning applications until June 2022,” he said.

“Some applications will continue up until October, with the possibility of legal action late into 2022.”

He pointed out that developers who submit pre-planning applications before 17 December will have until June 2022 to get their final applications in.

“All this means that it is feasible that SHD applications will continue to be decided on up until October 2022,” he said.

However, a spokesperson from the Department of Housing told The Journal that it is not correct to say that there is a delay in the of end the SHD scheme.

The current SHD process is due to be phased out from 25 February 2022, they said, adding that the new Large Residential Development Bill will end SHDs earlier and replace them with a new local authority-led process in December 2021.

Regardless, this may not be the final controversy surrounding a build-to-rent scheme before the SHD system ends.