Sean Murray 08/07/2020
The year-on-year change reflects a volatile market according to the latest housing report from Daft.ie. Average sale price in each county in June.
Source: Daft.ie

THE AVERAGE SALE price of a home in Ireland in June was 3.3% lower than the same time last year, according to a new report from property website Daft.ie.

Rents, meanwhile, have risen but only slightly with an increase of 0.2%.

Providing commentary to the report, economist Ronan Lyons highlighted that 3,000 homes were put up for rent in Dublin in the first six months of 2020 compared to 2019 and this was “most welcome for a city starved of rental homes”.

“The danger, however, lies in in the trap of thinking that these extra 3,000 homes on the market represent the solution to the housing shortage,” Lyons said. 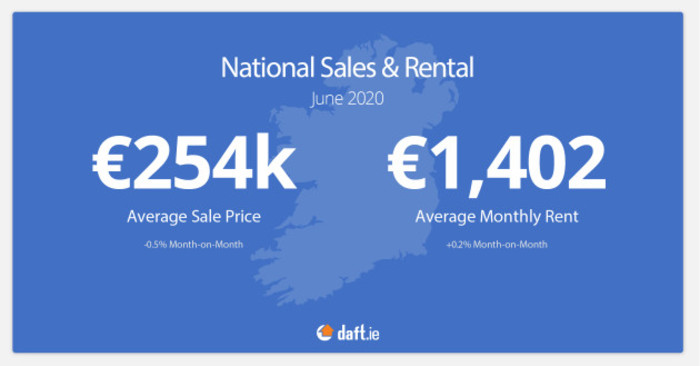 The average monthly rent on a property across the country was €1,402.

Both of these figures rise sharply in Dublin. The average sale price of a home in Dublin last month was €369,000 and the average rent was €2,023. 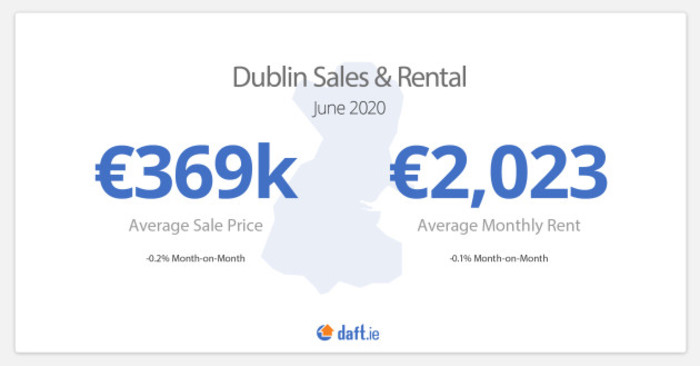 However, the Covid-19 crisis has seen a large degree of volatility in the sale price of homes in Ireland, with April seeing a large fall before rising again in May.

The report said: “The average listed sale price nationwide fell by 0.5% in June, having risen by 3.8% in May.”

The number of homes up for sale, meanwhile, has fallen sharply in recent times. 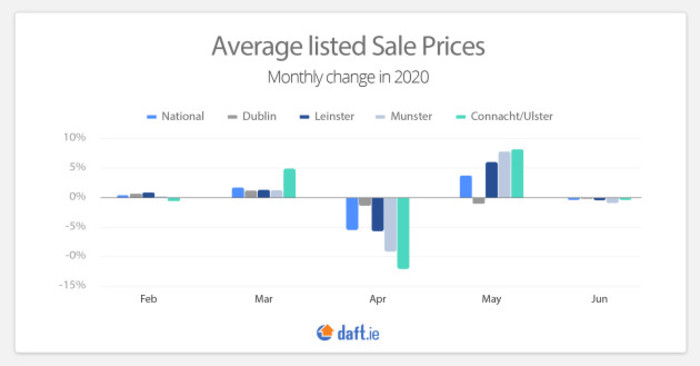 “The total number of homes available for sale nationwide on 1 July was 19,510, down one quarter on the same date a year ago and the lowest July total since 2006,” it said. “Over 5,200 homes were advertised for sale during June 2020, 15% fewer than during June 2019. In April and May, the number of sale listings nationwide was down nearly 75%.”

But, while there are fewer homes for sale, there are more up for rent. 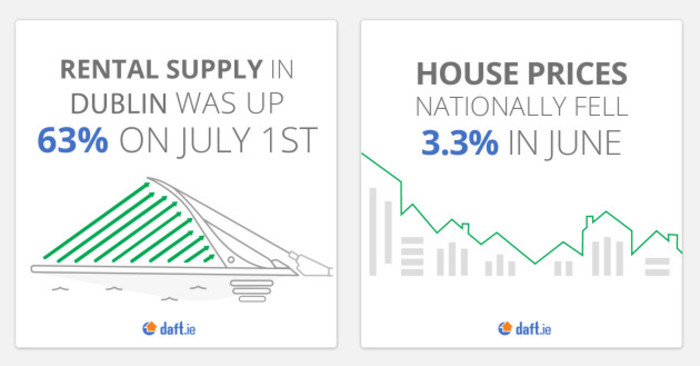 In Dublin, availability is noticeably higher than a year ago – with over 2,700 homes on the market on 1 July this year, compared to fewer than 1,700 in July 2019. Elsewhere, availability is down, by between 10% in Connacht-Ulster and 17% in Leinster, outside Dublin.

Lyons, an assistant professor in economics at Trinity College Dublin, said the increase in rental properties would only be enough to meet one month of demand and can thus be described as a “one-off gain”.

He added: “The country is still in need of hundreds of thousands of homes, principally for smaller households of one to two persons, in the social and market rental segments, and in or close to the biggest cities and towns.

Ireland is used to building homes for bigger households, away from the big cities and for owner-occupiers. Repositioning the construction sector to build what the country needs is one of the big challenges for the new government.

You can read the report here.