House prices jumped by an average of €20,000 in the last 12 months as supply fell significantly

Gráinne Ní Aodha 31/03/2021
In Dublin, prices rose by 6.9% in the year to March 2021, but the largest increases were seen in the counties surrounding Dublin and in the other cities.

THE AVERAGE HOUSE price rose by 7.6% in the year to March 2021, according to the latest Daft.ie House Price Report.

This marks the second quarter in a row where prices are nearly 8% higher than a year previously, roughly twice the rate of inflation seen during 2018 and 2019.

The average house sale price nationwide in the first quarter of 2021 was up 68% from the lowest point in early 2013 – but still below the Celtic Tiger peak.

In Dublin, prices rose by 6.9% in the year to March 2021, but the largest increases were seen in the counties surrounding Dublin and in the other cities. 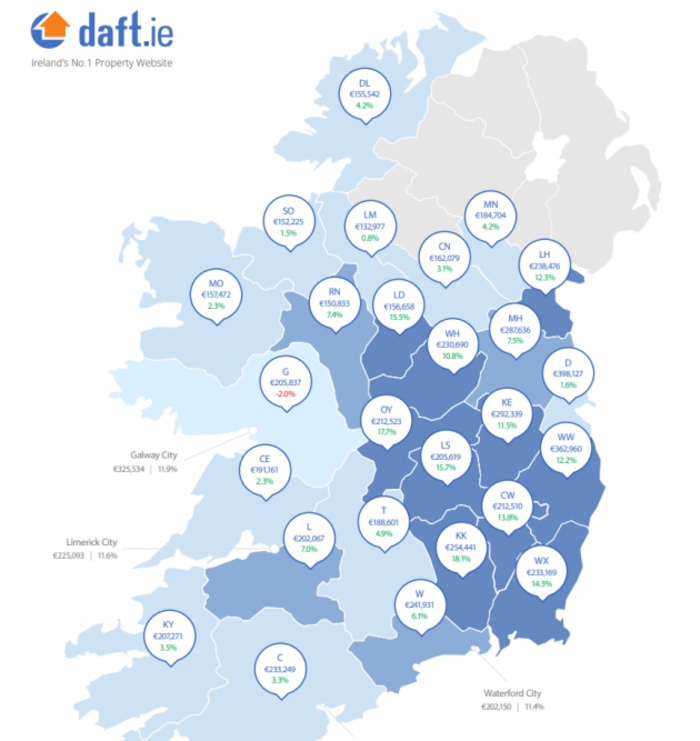 In Cork, Galway, Limerick and Waterford cities, listed prices were between 11% and 12% higher in the first quarter of 2021 than a year previously, while in Leinster (outside Dublin), they were 12.4% higher on average.

Conversely, in Munster, Connacht and Ulster (outside the city areas), there was a more muted price growth – with annual increases of close to 4% in Munster and the three Ulster counties and just 1% in Connacht. 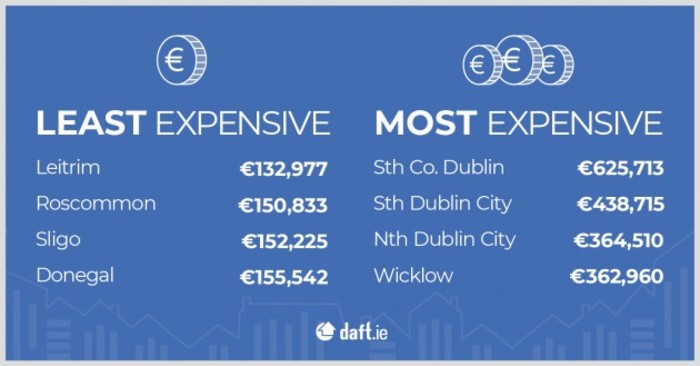 The total number of properties available to buy on 1 March was just under 12,000, the lowest figure recorded since the rise of advertising properties for sale online.

This represents a year-on-year fall of 40% nationwide, although the stock available for sale in Dublin has fallen by less than the national average, while stock for sale in Leinster (outside the capital) is down by nearly one half.

Commenting on the report, its author Ronan Lyons, economist at Trinity College Dublin, said: “The figures in this latest Daft.ie report confirm that the impact of Covid-19 on the sale market was a massive shock to supply, with seemingly far less impact on demand.

The total number of homes listed for sale in the twelve months to February nationwide was just 45,700, down a third on the previous 12-month period. This sudden collapse in supply – at a time when demand has held up remarkably well – has converted into sharp upward pressure on prices.

“It highlights the importance of supply in determining market outcomes and is a reminder that, even when the pandemic subsides, the need for a substantial volume of new homes to be built each year will remain.” 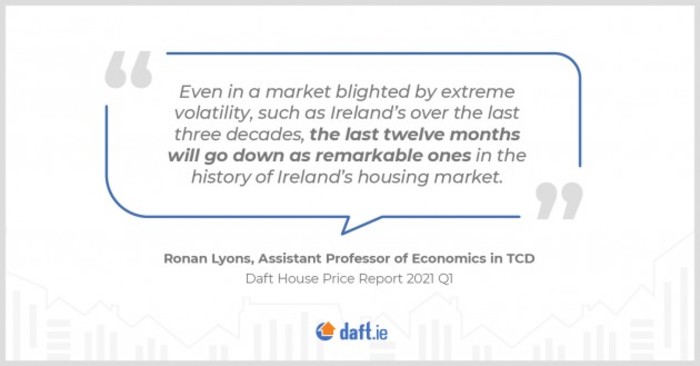 Pat Davitt, IPAV Chief Executive said many agents are not listing new properties to the market on property portals because of the severity of the Covid-19 restrictions on showing properties.

“We have sought an easement from the Government on one aspect – to allow agents to show properties, under strict health and safety protocols of course, to potential buyers who can confirm they have the necessary funds in place to purchase,” he said.

He said auctioneers throughout the country are seeing extremely strong demand for homes that they are unable to satisfy.

IPAV’s own Residential Property Price Barometer, which charts actual prices achieved by auctioneers, rather than asking prices, found price increases for the latter half of 2020 over the first six months of the year in the vast majority of the country, with the largest increases taking place in four-bedroom homes.

“The housing market is like any other market, it’s driven by supply and demand. Builders must get back, safely, to building more homes.”

The full Daft.ie report can be found here.