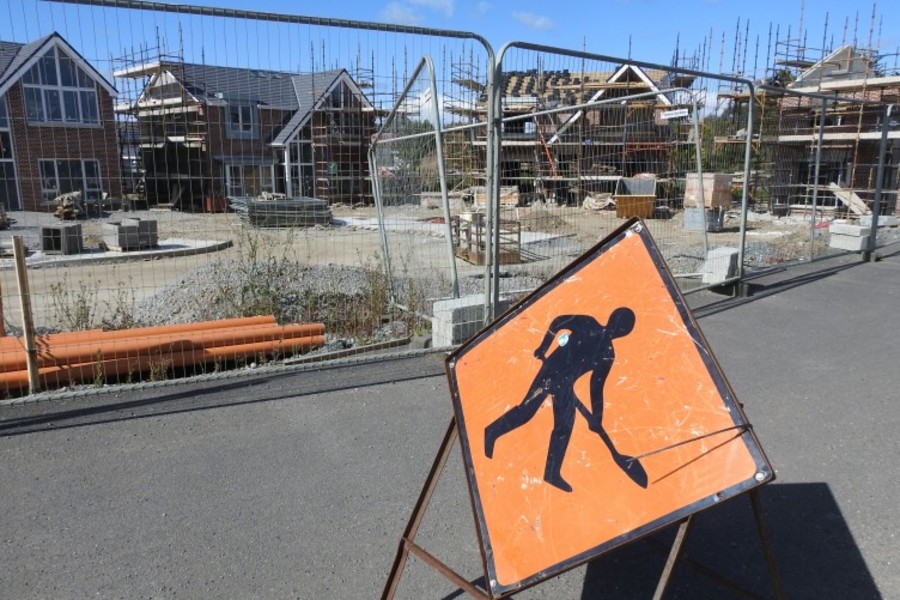 Source: Shutterstock / Derick Hudson
Depending on what changes are required, and what passage of legislation or amendments are needed, it could take a number of weeks to get changes over the line, say sources.

PROPOSALS TO TACKLE investment funds pricing first-time buyers out of the housing market will be brought to Cabinet next week, the Tanaiste has said.

However, while Leo Varadkar said the government plans to act quickly, it is understood that the measures if adopted by government could take a week or two to get over the line, according to senior sources.

Varadkar told the Dáil that home ownership has been out of reach for young people for “far too long”.

The Tanaiste said investment funds were necessary when they came into the country a decade ago but that the policy now needs to change.

Speaking during Leaders’ Questions, he said: “Homeownership is now out of reach for far too many people, for far too long.”

“That does require a change of policy. One that prioritises first-time buyers and families who need to upgrade to a bigger home.

“For that reason, next Tuesday Cabinet will consider proposals to do exactly that. They’ll be brought forward by Minister Donohue and Minister O’Brien, and they will act quickly in that regard.”

Pressure has been mounting on the Government to take swift action to close off incentives for investment funds to purchase large amounts of housing in Ireland as soon as possible.

While Varadkar declined to go into the details of the proposals to go before Cabinet on Tuesday, it is understood that the government is giving consideration to ring-fencing the number of homes for owner-occupier buyers, as well as taxation and legislative changes.

The issue of stamp duty is also being looked at as a mechanism to hit cuckoo funds.

As a result of the fallout from Round Hill Capital buying 135 homes at a new development in Maynooth, Co Kildare, the issue of housing has been raised each day in the Dáil this week.

The issue of housing – including the advantageous treatment of investment funds – also featured in last night’s Fine Gael and Fianna Fáil parliamentary party.

The Taoiseach said that like Brexit and Covid “it is all hands on deck” when it comes to housing.

“We are working on dealing with the issues of institutional investors competing with first time buyers and Ministers Donohoe and O’Brien are progressing solutions,” he said adding that the urgency of housing is being dealt with at the same level of Covid and Brexit.

However, there were some critics, such as Sligo-Leitrim TD Marc MacSharry, who said “Fianna Fáil housing policies are Fine Gael light… they are window dressing when we need to renovate the whole house”.

It is understood that work is ongoing at official and ministerial level on new measures targeted at cuckoo funds, according to a spokesperson for the Finance Minister Paschal Donohoe, who said progress is being made.

A senior source confirmed that such provisions could take a “week or two” to get over the line, while another said they expected measures “in the next two weeks”.

A government spokesperson said this week that depending on what changes are required, and what passage of legislation or amendments are required, it could take a number of weeks, and couldn’t give a timeline on when the measures might come into effect.

Opposition parties have accused the Government of showing a “lack of urgency” on the issue.

Senior sources confirmed that targeted stamp duty increases that could discentivise investors buying up housing is being considered.

Increasing the stamp duty rate that applies to the sale of residential property could act as a deterrent to funds, but opposition parties have pointed out that such a rate rise would have to be significant.

Owner occupiers would continue to pay a 1% stamp duty rate, but the rate paid by these funds could be increased significantly to deter them from buying up new and existing housing.

12.05.2021Housing crisis: Taoiseach under pressure in Dáil as CSO data shows price of a home rose by 4% in 12 months
09.05.2021'I feel constant shame at our situation': Your stories of Ireland's housing crisis

The Government maintains there is a role for investor funds, particularly for apartment blocks in the cities, with sources stating that typically the majority of apartments are not owner-occupied and are owned by investors. While in the past, those owners might have been one-off investors such as people using the property as their pension fund, that has gone now since the financial crash.

Those in government circles acknowledge that vacancy is a problem when it comes to some of these apartment blocks, and while a vacancy tax could prove difficult, it would not be impossible.

Varadkar admitted today that house prices have risen in the last year, but added: “We’ll need to see where that goes.”

He added: “That may change, that may stabilise or go a different direction in the next few months.

“A lot of statistics at the moment are thrown by the pandemic, we need to bear that in mind.”

He said that while homeownership levels in Ireland have fallen, it remains at between 65% and 70%, a figure higher than in “the US, UK, Germany, France, Australia, lots of other places.”

He said investment funds will still have a role to play in the housing market.

“There’s no way the State can finance that all on its own.

“So we need the private sector and public sector working together. We need public housing and we need private housing.”

The Taoiseach was in a combative mood yesterday during Leaders’ Questions when asked about housing, defending the Government’s record, and stating that housing is the number one priority.

However, Opposition TDs railed against the Taoiseach stating that the cuckoo funds have been betting on this Government to the tune of €53 million every week this year.

Social Democrats TD Catherine Murphy and Sinn Fein TD Pearse Doherty both cited a report from Gillen Markets, a financial advisory firm based in Dublin, which told its wealthy investors that the current high level house prices and rents in Ireland is being driven by the Government’s housing policy.

It states that favourable policies are attracting institutional investors such as IRES REIT into the market.

The report states that overall the current housing policy has benefited both institutions and developers at the expense of individual buyers.

Doherty told the Dáil this week that investment funds have been swooping in and buying up properties right across the board, not just in the case of Mullen Park in Maynooth a couple of weeks ago.

He said 42 other transactions totalling 5,700 homes were bought up by the funds in 2019 alone.

“The problem is not just that these funds are buying up properties. They are pushing up the price of a home by paying more than €80,000 above market price, thereby creating a new ceiling and locking out people,” said Doherty.

“Both the Department of Housing and Finance are working to identify options to address the issue of bulk purchases of completed homes by institutional investors of all kinds.  That work is ongoing.

“Minister Donohoe has committed to examining the tax system and Minister O’Brien is examining options relevant to the development process. All options will be considered by the Government to identify the optimal method to address this issue,” a spokesperson for the finance minister said.

Last night, a Sinn Féin motion calling on the government to end the tax advantages and exemptions for investment funds, as well as an immediate rise on stamp duty on REITs and IREFs was defeated in the Dáil.

Instead a Government countermotion was accepted, which committed to bring forward urgent and “appropriate solutions” to stop protect and enable idea of home ownership.