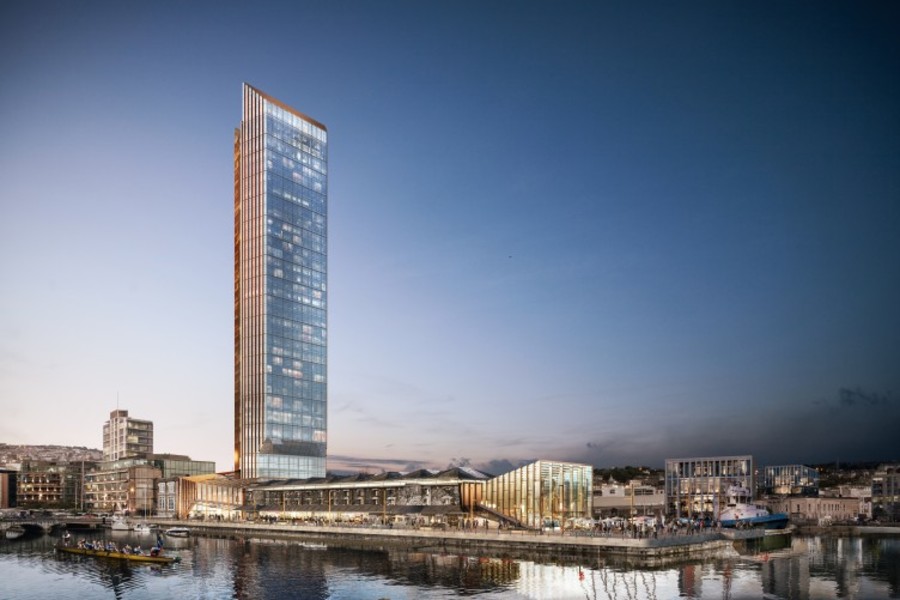 The plans include a five-star hotel, a range of commercial units for retail, food, tourism and leisure.

PLANS FOR A new 34-storey hotel tower have been given the green light as part of a redevelopment of Cork City’s Custom House Quay site.

Upon completion, the tower will be the tallest storied building on the island of Ireland – surpassing the 28-floor Obel Tower in Belfast and the 17-storey Elysian in Cork, among others.

The plans include a five-star hotel, a range of commercial units for retail, food, tourism and leisure, along with the protection and restoration of surrounding historic buildings.

“The new development will not only revitalise and enhance the site, but offer a programme of cultural events, food and beverage outlets, some office space and extensive recreational quayside public realm which will be fully accessible to citizens and visitors alike,” said the Tower Holdings Group in a statement welcoming the decision.

“The slender sculpted tower will form a contemporary new piece to complement the much loved historic composition, bringing new purpose and dynamism to the river Lee, as well as provide the city with a beacon to the future,” said Marco Gamini, lead architect for the project for Gensler.

In 2017 the Port of Cork sold the three-acre site in the city’s Custom House Quay to Tower Development Properties, a company formed by Kerry brothers Kevin and Donal O’Sullivan.

The site was put up for sale in 2016 through real estate agents Cushman & Wakefield with a guide price of €7 million. The final sale price is believed to be in the region of €5 million.

The brothers in recent years helped build parts of New York’s Ground Zero towers and 9/11 memorial, as well as Apple’s flagship store in the city.

“I believe this project will add great value to the city and boost the regeneration of the docklands. I have always believed in a strong future for Cork and we are proud to be part of this future as the world recovers from the pandemic,” Kevin O’Sullivan, CEO of Tower Holdings Group.

“Another key aspect in making the scheme a commercial success is the continuation of maritime activities on the river, ensuring the quays and jetties remain fully accessible and utilised by passenger cruise vessels, water-based transport/tourism and leisure craft to access the site and the city centre by river.”