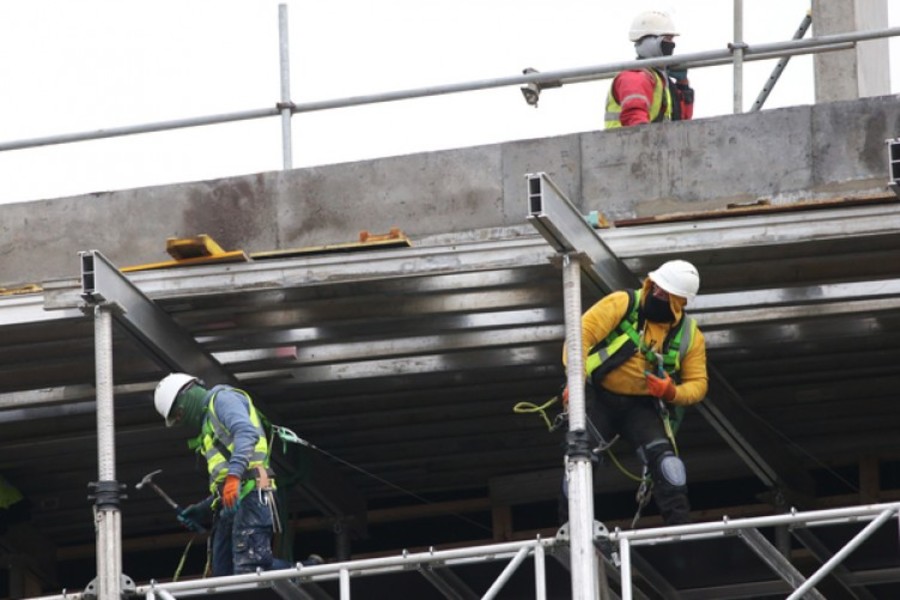 Builders working at the National Children's Hospital in Dublin.
Source: Sasko Lazarov/RollingNews.ie
Some of the biggest FDI sites in the country are open under government exemptions.

SOME CONSTRUCTION WORKERS have expressed concern about sites remaining open during Level 5 restrictions despite a general shutdown of the sector.

Non-essential construction sites have been closed since Friday 8 January but the numbers of construction workers on the PUP suggests that many sites remain open.

One union has said the figure in Dublin is up about 30% of a sample selection.

Ahead of the shutdown of the sector, Housing Minister Darragh O’Brien said that he was expecting “the vast majority” of the 200,000 people employed in the construction sector to be “staying at home”.

Figures this week from the Department of Social Protection show that there are currently 56,217 people from the construction sector availing of the Pandemic Unemployment Payment (PUP).

Last week, when the construction shutdown was also in effect, there were 32,152 workers from the sector availing of the PUP.

The figures for the past two weeks are well below the peak at the beginning of May 2020, when 79,300 construction workers were availing of the payment.

As well as various housing projects, a number of the largest FDI construction projects in the country are remaining open during Level 5 this month. This includes data centres for Facebook and Amazon in Clonee and Tallaght respectively, as well as Intel’s expansion in Leixlip.

The Statutory Instrument (SI) signed by the Minister for Health on 7 January that provides the legal basis for new restrictions lists 12 different exemptions to the construction shutdown.

Among the exemptions are the construction of health projects, education buildings and social housing projects that are within eight weeks of completion.

The government had previously said that one exemption would be for “certain large construction projects in the exporting/FDI sector”.

The SI signed by the minister does not make specific reference to the FDI exemption and TheJournal.ie sought clarification on this matter from the Department of Enterprise, Trade and Employment.

In response, the department said: “There are a limited number of exemptions to this new restriction including for certain large construction projects in the exporting / FDI sector based on set criteria.”

The department referenced an exemption in the SI that relates to the construction of projects “necessary for the maintenance of supply chains”.

The department said it it is “a matter for individual companies” to decide if they are covered by the above exemption but provided TheJournal.ie with a list of 11 types of projects to which the supply chain exemption “may be applied”.

Nine of these types of projects listed related to various types of manufacturing but two were related to the online industry.

TheJournal.ie sought comment from Facebook, Amazon and Intel as to which exemption their construction works are covered under.

Intel confirmed that about 3,000 people are working at the main site under the supply chain exemption but that other construction works not covered have ceased. Intel has previously published details of the Covid-19 safety measures at the site and said that health is the company’s “top priority” for workers.

In its advice to builders, the Construction Industry Federation also said that is up to the companies involved with a project to determine if a project can continue to operate.

“Consult with your client. The onus is on them to establish if projects are essential,” the industry group says.

The Unite trade union, which represents workers throughout the construction sector, recently surveyed about 120 sites across the wider Dublin area to see which ones remained open.

Unite’s regional officer for construction Tom Fitzgerald said that “about 30%” of the sites surveyed remained open.

He said the union feels there has been “by an large a high level of compliance” with the shutdown but that there has also been “some examples” of workers being punished for raising concerns.

Fitzgerald told TheJournal.ie that compliance is perhaps better than during the first lockdown in March 2020:

We’ve had situations where we’ve had had let’s say non-compliance with public health guidelines and we’ve intervened with many builders and we’ve had a good response. Because they don’t want to get to a point where we can make mischief and follow up with photograph or video footage, like we did last March when there was wholesale non-compliance.

“So our approach has been in trying to achieve high levels of compliance and by and large we’ve been able to do that.”

In circumstances where workers have been punished for raising concerns, Fitzgerald said the union has sought to “bring industrial strength to bear”.

In the past week, a number of construction workers on sites throughout the country have expressed unease about being asked to continue working.

A worker at a residential construction site in Co Meath told TheJournal.ie that the site he’s on briefly halted work when it was visited by gardaí after local people had expressed concern.

The man, who has an underlying health condition, said that workers on site try to take precautions but that there is only so much they can do.

He says he is concerned about brining Covid-19 home to his family and is angry that decisions about staying open are not being taken by those working on the ground.

Asked what advice Unite has for workers in such a position, Fitzgerald says that “nobody should be expected to do something that they feel is dangerous or unsafe”.

“I’d asked them to contact ourselves on our hotline or on our Facebook account as soon as possible and we’ll do everything we can to assist them.”