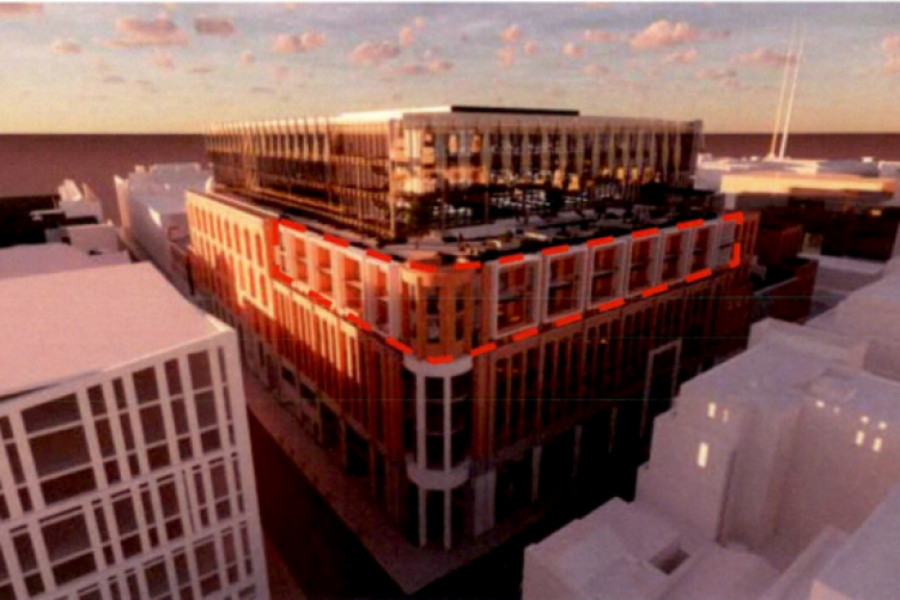 The development would go literally above the current shopping centre site.
Source: Manahan Planners/DCC
Sinn Féin’s Eoin Ó Broin said the plans provided “further evidence” as to why co-living should not be permitted.

AN APPLICATION HAS been lodged with Dublin City Council for permission for a major new development atop the Jervis Street Shopping Centre that would include 127 co-living spaces.

The proposal would see the demolition of part of the retail area and car park of the city centre location to make way for the mostly 18 square metre co-living spaces that would have common areas, lounges, a gym, kitchens, laundry and an “amenity open space”.

This planned development on the north side of Dublin city is one of a number of co-living planning applications made in recent times, with other proposals met with strong opposition and described in some quarters as Dickensian. Appeals have been lodged against similar planned developments, such as in Rathmines and Tallaght.

“That last thing we need in the city is co-living,” he said. “We need affordable accommodation for people who live and work in the city centre.”

Minister for Housing Eoghan Murphy faced criticism last year for his comments on co-living developments, after telling a conference that such blocks offer an “exciting” choice to young workers.

He also told Newstalk Breakfast that co-living was “more like a very trendy, kind of, boutique hotel-type place” after it was put to him the conditions were more akin to a prison.

Planners for the Jervis Street proposal said in documents to the council that it would create “an exciting, vibrant mixed-use development that will supply attractive facilities to patrons and will contribute positively to the continuing enhancement of this part of Dublin’s north inner city, both in terms of footfall and improving the visual amenities of the area”.

The development would involve three uses, all located above the existing shopping centre.

The first would see a two-storey development above the corner of the centre bounded by Jervis Street and Abbey Street Upper. This would contain 20 one-bed apartments and four two-bed apartments.

The second proposes to demolish part of the retail and car parking floor area on Mary Street and to construct in its place a six-storey building to be used as a co-living development.

Planners said that a “key feature of successful co-living schemes internationally is the provision of wider recreation and leisure facilities” as part of the development. Under these plans, each person would have 11.8 square metres of communal space.

The third part of the plan would see the roof no longer used for parking and plant, and instead three floors of offices built around a central internal atrium.

Ó Broin said that under these proposals two people could be sharing 18 square metres, leaving them with just nine square metres each. “This is unacceptable,” he said.

“Co-living is bad for the people forced to live in it. If people were given the choice, they wouldn’t. And, at times when people are facing isolation and have to socially distance, none of that can be achieved in co-living. It serves no one.”

The Sinn Féin housing spokesperson said he feared that a government involving Fine Gael and Fianna Fáil wouldn’t scrap co-living developments, and said it may lead to a number of similar developments in cities in the future.

“It’s really bad for the city,” he added. “What we really need is accommodation for working people in Dublin 1, 2, 7 and 8. Any new minister for housing will have the power to scrap co-living, and I believe he or she should do that.”

The last date for observations to the council on this proposed development is Wednesday 10 June.