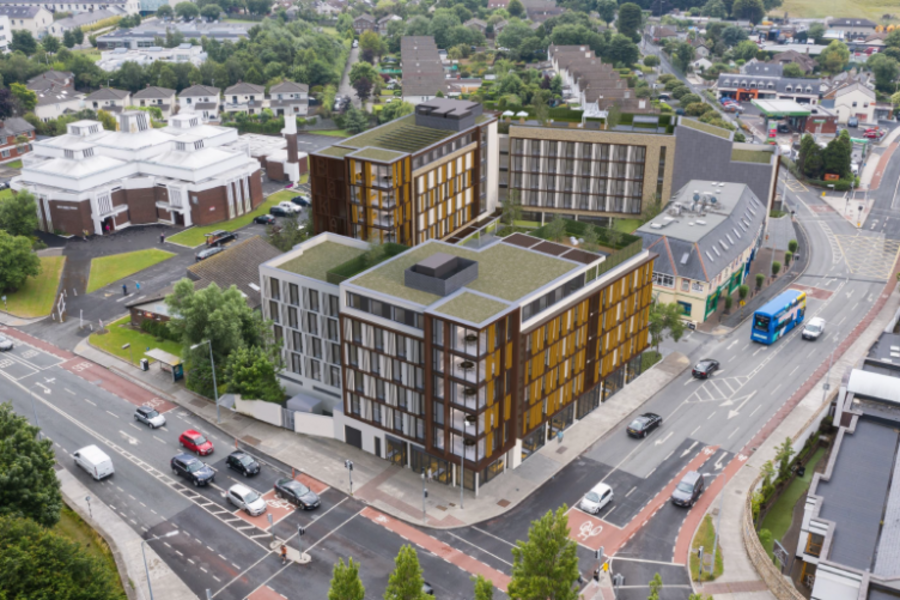 CGI visualisation of what the complex could look like.
Source: Big Lolly
Baker’s Corner pub would be demolished as part of the scheme

PLANS FOR A 276 unit student accommodation complex for Dun Laoghaire are facing opposition from local residents, a nursing home and An Taisce.

The scheme — which has the formal support of the Dun Laoghaire Institute of Art, Design and Technology (IADT) — involves the demolition of the existing Baker’s Corner pub and the construction of a replacement pub and two commercial units along with the 276 student accommodation units.

Planning consultants for the applicants, Brock McClure, stated that the planning application “has been prepared in the context of the significant need for student accommodation in Dublin city and Ireland”.

Brock McClure said that the spot is a prime under-utilised suburban site located close to key public transport nodes and is therefore well located to provide for a higher residential density and additional height in compliance with the national policy mandate.

However, one of those objecting to the scheme is local TD, Richard Boyd Barrett (People before Profit-Solidarity).

Boyd Barrett has told the appeals board that local residents will be heavily impacted “by the inappropriate height of the development”.

He said: “While IADT are in need of student accommodation, we fear this accommodation will be too expensive for most to afford and therefore not fit for purpose.”

Boyd Barrett stated: “It is much too large and will be very much out of character with the landscape, in an area with two-storey houses and Ashbury Nursing Home.”

Planning consultants Avison Young have lodged an objection by the Baker’s Corner Community Group which is made up of 60 local residents.

The objection states that the proposed development “will have a severely negative impact on the existing residential amenity in the vicinity of the site, in terms of excessive height, scale, massing, impact on sunlight/daylight, noise and traffic”.

The objection states that, in the absence of any of the suggested amendments, “the proposed development would be overbearing and obtrusive, excessive in height and scale with an unacceptable negative impact on residential amenity and should be refused”.

Planning consultants for the nearby Ashbury nursing home, Marston, state that the proposed development “will result in a serious loss of residential and visual amenity to the residents of the nursing home”.

The objection states: “This will be due to the loss of daylight/sunlight; overlooking; and overbearing scale of the proposal, which is compounded by the highly sensitive environment of the nursing home and its residents.”

An Taisce claims that the height of the building will be “a flight hazard” for wildlife.

In its objection, Rebecca Jeffares for An Taisce also claims that the scheme is visually obtrusive, represents overdevelopment of the site and would be out of character with the area.

The Dun Laoghaire Institute of Art, Design and Technology (IADT) has submitted a letter lodged with the application that formally supports the scheme.

The Institute’s financial controller, Bernard Mullarkey, has told the appeals board that the proposed scheme is located fewer than five minutes walk from its campus.

He stated that the current accommodation demand from the Institute’s student population is 1,000 to 2,200 rooms per year.

Mullarkey said: “Due to the lack of significant existing accommodation in proximity to our campus, the only available options to our students are private rented accommodation or to stay living at home.”

A decision is due on the application in January.