Your guide to Ringsend: Iconic slice of inner-city Dublin with loads of new life

And the best walk in the city.

RINGSEND IS AN ancient area of the city. Sitting on the spit where the Liffey meets the sea, its name is thought to be an Anglicisation of Rinn-abhann - the end spit of the land.

For centuries it was the main dock for ships crossing the Irish sea – Cromwell landed in Ringsend before cutting a bloody swathe through Ireland in 1649. But up until the 19th century, Ringsend was a separate village not connected to the city proper. An 1818 map shows open fields between Merrion Square and Grand Canal Dock.

By the 20th century, Ringsend had been well absorbed into the city, developing its characteristic landscape of mostly early-1900s cottages and mid-1900s corporation flats. It developed the strong community it retains today, with many families staying in the area for generations. And it was frequently used as a movie location: Agnes Browne, In The Name Of The Father and The General all used it as an inner-city proxy.

In recent years the arrival of the Covanta incinerator (aka the Death Star, aka the Poolbeg Pyramid) has caused controversy. Meanwhile, the arrival of Google and other tech companies in the Docklands brought an infusion of money (and more well-heeled young workers) into Ringsend, and over time many young families have moved into the area alongside the long-established residents and short-term renters.

Take me there! OK, here you are on the main street between the Oarsman and St Patrick’s Church.

So what’s the big draw? It’s an old neighbourhood with a long-established community and a powerful sense of identity – with the additional benefit of being literally steps from the centre of Dublin. It’s also an area that’s growing increasingly diverse as a multinational tech-sector population mingle with born-and-bred locals.

Part of the appeal, too, is that Ringsend is deeply connected to the identity of Dublin. The sight of the Poolbeg towers from the plane or boat has marked homecoming for decades of emigrants and holidayers. And the walk out to the lighthouse is a pleasure for people from all around the city.

What do people love about it? The community, says resident Zara Hedderman.

Whenever there’s a Bank Holiday or a seasonal occasion, such as Hallowe’en, there will always be some street party or celebrations. Everyone is really proud to be from Ringsend and they love the area. Pop into the pharmacy, pub, and local supermarket you’ll always see people bumping into each other and launching into conversations about their friends and family.I also love the close proximity to the canal and The National Print Museum. There’s lots of really great places to eat and get coffee and enjoy general rambles.

And… what do people NOT love about it? Its position between the 3Arena and the Aviva Stadium makes for some tricky crowd management, says Zara.

The only annoying part about Ringsend is the aftermath of a concert in the 3Arena.The spillage of people after some gigs is annoying when you’re subjected to The Sign of The Times being sung at the top of people’s lungs at the end of the Harry Styles concert. 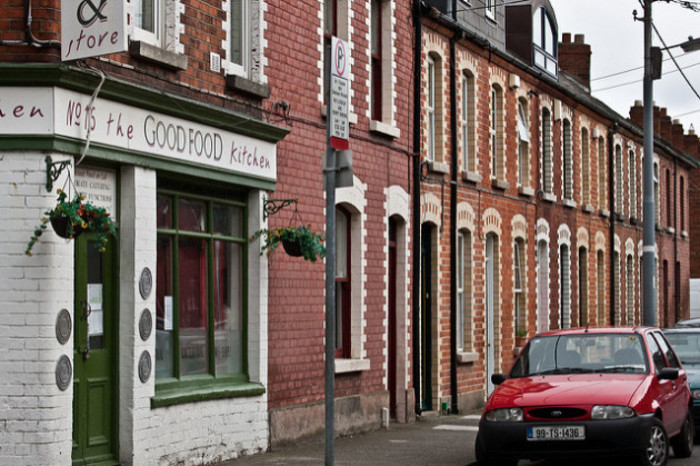 What’s the story with house prices? The average asking price for a property in Ringsend and Irishtown was €395,823 in the first three months of 2018, according to Daft.ie. That’s slightly below the Dublin average – but fairly steep for an area where two-bedroom homes dominate the market.

Perhaps needless to say, it’s considerably cheaper on average than its D4 neighbours. The average price in Ballsbridge is €621,966 while in Sandymount it is an eye-watering €725,617.

How long will it take me to the city centre? No time at all. It’s a 25-minute walk from Ringsend to the heart of the city. As if that wasn’t handy enough, the Dart also crosses the area with stations at Grand Canal Dock and Lansdowne Road – from either it is a short hop to the north or south bay.

Dublin Bus services 1, 47, 56a and 77a pass through the neighbourhood.

Where should I get lunch? Try Annie’s Cafe, a neighbourhood place on Grand Canal Street that serves a simple but effective menu of breakfasts, salads and sandwiches.

Alternatives: The Good Food Kitchen does, eh, good food – mainly in the shape of sandwiches and salads. Or a short walk away, there’s D4 lunch institution Juniors for some of the best sambos in town.

And what’s my new local? The Yacht is an old local with a young heart. Stop by for a cold one.

Alternatives: The recently refurbished Merry Cobbler comes recommended, and The Oarsman has carved out a good niche as the local gastropub.

Schools and supermarkets? As you might expect in a location so close to the city centre, large supermarkets are in short supply. There’s a Tesco Express in the village. For a proper Big Shop, options include the Tesco Superstore in the Merrion Shopping Centre and the Aldi and Lidl in East Wall.

There is one post-primary school in the neighbourhood itself: Ringsend College, which is mixed interdenominational with 166 pupils. Other options are nearby.

Anything else I should check out? The walk out to the Poolbeg lighthouse is a citywide treasure on a sunny day: a stroll along the Great South Wall with the terns and guillemots for company. There’s usually a coffee truck there too (courtesy of Mr Hobbs) so you can caffeinate as you walk, before getting a wonderful view back over the city and the estuary from the other end.

OK, I’m sold. Give me one piece of Ringsend trivia to impress a local. The graveyard at St Matthew’s Church is host to many sorry victims of shipwrecks. The bodies of those who drowned in Dublin Bay would often wash up on the surrounding tidal marshes, and be brought to the church for burial.

Turtle Bunbury notes the story of one shipwreck victim in 1743 who came back to life, presumably after being nailed into his coffin. According to the Dublin Gazette he had been brought “from Rings End to Irish Town… to be buried but when they laid him on the ground the coffin was observed to stir, on which he came to himself.”

Do you live in Ringsend? Share your opinion in the comments!